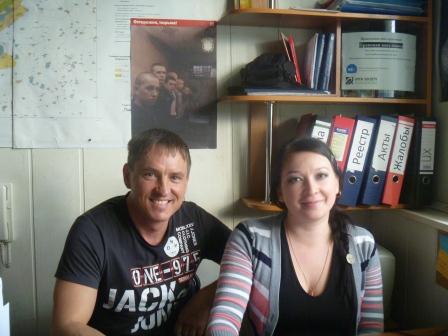 Lately over the Internet Chelyabinsk penal colonies are associated with torture chambers in penitentiary system of Russia. General Zhidkov, The Head of Main Department of the Federal Penitentiary Service in Chelyabinsk Regionand his crew (they killed prisoners and cover killers) are convicted and sentenced to prison terms. Not once I have visited as a member of Human Rights Activists group but there are no changes. Prisoners are killed, beaten and badly injured, extortion is everywhere. Prisoners’ complaints are no sent out, Public Prosecution office almost does not work. From outside it seems there is no law at all over there but there is law and power of the Head and his servants in uniform. Having visited another colony we (R. Kachanov, S. Malyugina and me) assured ourselves how uneducated staff are there. One officer made me write request to the Head of colony in order to get registered business trip permit, another one refused to make a stamp on notification for prisoners about free consultation. R. Kachanov was forced to wait and to explained that they simply don’t know the law.

The Head of Operational Department, Tychkov (as he called himself) came to «help» and told me I have to register my trip permit at Department of Internal Affairs in Kopeisk (Chelyabinsk Region). As for payment for this trip I have to apply to Ministry of Finance. That’s it.

It was clear that staff of this penal colony doesn’t know about law without mentioning Human Rights.

After registration of our notification we were told to wait. We were expecting them since 10:30 till 15:00 but nobody came out. We didn’t have words to describe our condition. In the main office we didn’t get the answer on question: «Where is the Head of colony?» We had to call assistant of the Head of Main Department of the Federal Penitentiary Service Vassily Nikolayevich Nazarkin but it didn’t help. he said nobody will let us in.

Then we went to Chelyabinsk Public Prosecution office dealing with law-enforcement control in penal colonies, where we met with Alexander Petrovich Yakovlev. We gave him claim on staff of penal colony-6. We’ll see what he is going to answer. If he is not interested to help, we’ll make petition to the court. But not into Chelyabinsk court but higher -Moscow court. We are going to find a way to deal with it.

Later on the same day we met with member of Public Monitoring Committee Dina Lapytova and watched terrible video testimony of prisoners about tortures in penal colonies in Chelyabinsk . It’s enough stuff for documentary.

We are sorry for prisoner Abakumov D.N who was a witness seeing how prisoner K. was beaten and later dead. Because of that Abakumov was raped. Thanks to members of Public Monitoring Committee of Chelyabinsk region D. Latypova, N. Shur, V. Prihodkina, he stays alive.

Public prosecutor case in process only against prisoner Abakumov.

What is Investigation Committee of Chelyabinsk doing? Whom does it protect?

If they «work» in this way, who needs them?

Valeriya Prihodkina had blood-stroke fighting with tyranny, she is at hospital now. We wish her to get better soon.