MENUMENU
Главная News The presentation of the V.A. Shaklein in URFU
Поделиться
Твитнуть

October 10, 2012 meeting with Vladimir Andreevich Shaklein -Ural human right activist, also known as the oldest Russian dissident and political prisoner of 1970s will take place at Department of Marketing Communications and Branding of Ural Federal University as a part of students’ project «Dialogue as equals»

Vladimir Sheklein will present to students of Department his new collection «For Rights and dignity of Human in Russia» which includes exclusive information about author’s human rights activity from 1960.

Famous Human Rights Activists of the Urals, heads of Public organizations, lawyers, journalists and students of Yekaterinburg Universities will also participate in presentation of the book.

This meeting keeps traditions of project «Dialogue as equals». It is professional students’ project in business communications sphere organized by Department of Marketing Communications and Branding.

We look forward to seeing you: Yekaterinburg, 16 Chapayev Str, room 215 at 14:30. Presentation is a part of events dedicated to 15th Anniversary of Public Relations formation in Ural. 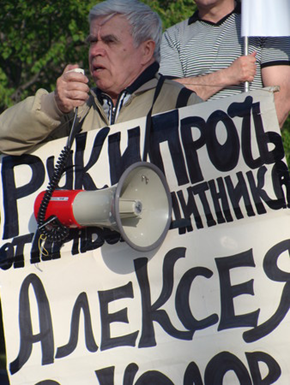 Born in August 22, 1937 in Izhevsk. Since 1960 he’s been dealing with Human Rights activity. In 1961 he was subjected to repression of KGB. Summer 1967, Vladimir Sheklein and his coworker Vladimir Balakiriev set up clandestine Human Rights organization «Public Awareness Society». In 1972-1973 Sheklein was arrested for «Antimonopoly Actions» and put into Lefertovo prison in Moscow. In 1975 he was forced to migrate to Estonia.

Since 1988 Vladimir was actively involved in public activity concerned Ural National Front «Memorial». In 1988 he was an activist of formation mass movement «Democratic Russia». In 1990 Sheklein was elected as a member to Sverdlovsk City Council.

In 2000 was elected as a member council movement «For Human Rights» and coordinator of Ural Federal region. In 2003 he was appointed as Regional Export of European Commission of Human Rights. Annually Vladimir accomplishes Human Rights program as free legal counsel for citizens and visits cities and regions of Sverdlovsk and other parts of Russian helping people.