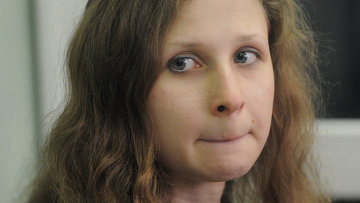 Colony administration in Berezniki where Alekhina serves her sentence have imposed some penalties, in particular for regime violation of prison. Processing of a complaint began on 31, January. Participation of Maria was provided by video conferencing with colony.

«Two penalties: for waking up later and impolite address to prison personnel are declared illegal. All the rest stand valid-penalty for another late wakening and for passing personal letters to her lawyer», -reported.

Court held that penal colony-28 in Berezniki in Perm region is obliged to neutralize infringement of law in this colony.

I begin with reasons of my decision to appeal to court. From the outside or how prisoners say: «from the freedom» it seems that all these things need for release on parole. There are no illusions, I know in political sphere to speak about such formalities as penalties or encouragements is stupid. So that’s why I am not here waiting for parole. I have another reason.

I suppose when there are so many unfair situations happening here, we have to speak about real picture. And outcome of this court process — recognition that actions of colony administration are illegal — is a symbol I work for.

I suppose prison reflects general pictures of processes in Russia. We all know what coercion, powerlessness, lawlessness. In penal colony we are under orders and duties depending on wearing uniform or robe with label tag. Deep inside we have tiredness and lack of justice. I just want to remind about the way we live, the way we exist in colony in order later on we will not say that we didn’t know about situation and everyone did it like others without thinking. I want to prove that not everyone does it and I am a living example.

I want to say there is a choice in life, freedom of choice for every human, no difference whether it is prisoner, colony administration or court. There is always choice between unfair and fair decisions. Here you can find many prisoners who want to say their own words, who want to state their disagreement with prisoners colony administration actions towards and the worst part is these violence has systematic state. But first of all, prisoners are scared, secondly they simply don’t know how to protect their rights. Nobody explains them how to appeal to court, it’s like the biggest secret. But if prisoner is about to complain to public prosecution office, suddenly monitoring committee is visiting the colony and with «magic tricks» decides that everything is legally. But to be honest most of complaints even don’t leave tables of administration.

In our colony-28 there are a lot of drug felons, drug addict who use drugs since childhood and many of them do want to cure addiction. All those people came up to me and said how much they want to get rid of drug addiction, get healthy but they need someone to help with it. Every day I see prisoners going to factory, after factory work they clean up territory from snow with shovels. Throughout winter prisoners remove snow and pile snow up. Apparently in spring we will throw snow away with the same shovels. Here it’s called «labor». I fact it’s series of activities with minimum sense and maximum physical efforts that prisoner can’t refuse to do. Prisoner doesn’t have right to make problems, argue or refuse. The most important- to do daily norm. Norm in Russian is universal category and crime psychological term. People fulfill norm, follow norm, inherit norm. Norm is power stage as we say in colony.

It is norm operations under what prisoners, administration live. Trust me no one likes it. It would be miles easier without it. But I don’t say we don’t need it at all, I simply underline that prison operation system needs to be changed. Why? First of all, because all these rules are no aimed at development of personality. Vice versa rules are red-tape, bureaucratic roll in which everyone tangled in. In this roll person doesn’t live, he exists. To prove it we can have a look at statistics, and it gets clear that correctional system is not working in Russia. The fact that prisoner wakes up 15 minutes later doesn’t influence anything except psychological condition and following discipline penalties cause only stress. These 15 min don’t affect working ability. Prisoners are not late for work or for study. Nothing happens because of 15 min except record in personal case about imposing penalties. These penalties of course have influence on release on parole. And the most important — administration manipulates prisoners with parole thing. This manipulation is built up on sense fear. It develops in prisoners such feelings as anger, hypocrisy, lying and personal degradation. In the end we have ressentiment society located on small territory surrounded wired fence. This system is not connected with corrections at all.

I want to say that we have to stop. We have to say «stop» to this system at least during this court. Just stop and remember that parole is not only letters. It’s many -many years which people can’t take as spiritual discipline. People degraded through these years. They degraded from tiredness, ignobility, betrayal they face. And yes, you can get stronger, enduring. But it never brings strength to get rid of addiction, in particular of alcohol, drug addictions. But intellectual and moral degradation helps to get back to wired prison territory. And there are some people for whom prison is already their home. They don’t know another life. They don’t want another life. They go back there. They go back because in colony personnel make decisions for them. They will show them what to do, to sit at the sewing machine and prisoners will make clothes for 8 and 12 hours. Later prisoners will be given a shovel. May be in couple year they will be allowed to do something they want as reward.

There are some unspoken rewards so prison can be privileged. For example coat of different color or he can sleep on bottom bed. Mentioned above things do not refer to real development absolutely. It is little things but everything is based on little stuff here.

I want to say that shovel doesn’t explain to prisoner what the law is. I want to say that I am rebellious person and I am person connected with art all my life. I tell about law people who are obliged to follow the law and explain these laws. It seems to me I have a suggestion how to minimize absurd in prison system. I want law authorities try to explain law to someone who break it. I mean here people committing crimes. Now I am also prisoner and I want the same: let someone explain me the real sense of law but not hide it from me.

I speak from my heart. I am here in court for everyone who is afraid of speaking. I believe that we will succeed in the end. Simply because tyranny above people can’t last forever. I want to add that things connected with jurisprudence are not familiar to me.

Philosopher Heidegger said : » Language is the house of being «. So being in language of orders, applications. departmental acts, regulations are awful. I feel now I am dying. I need realization of my potential and deal with what I want. I believe that general victimization will stop one day. I feel that decision is already made not in our favor. But I hope after this process administration will realize we are humans and robe with label tag is not important. We are humans. That’s it. 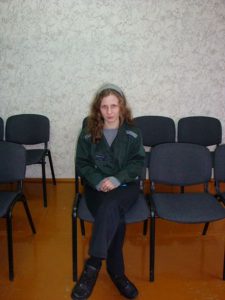 In January court in Berezniki refused Maria Alekhina to give deferral of punishment, Maria states a reason that she has a child of ten -der years. Court held that this reason was already taken into account by Hamovnicheskyi court in Moscow, and new circumstances of mitigation of punishment are no found. Remind that five girls in the end of February 2012 came to The Cathedral of Christ the Savior in Moscow, put on masks and performed punk- prayer. Video was posted on Internet and caused stir among the public.

Police arrested three girls-Alekhina, Nadezhda Tolokonnikova and EkaterinaSamusevich. They were sentenced to two years in prison on 17 August for disorderly conduct by Moscow court. 10 October 2012 court held to release Samusevich and changed punishment to conditional sentence. Sentence of Tolokonnikova and Alekhina still valid.