Convicted Demko addressed to our organization and stated that upon arrival in pretrial detention facility -1 on February 18-19 he gave his stuff (jacket, winter shoes, hat etc) into storage. However, when the time has come for him to be transferred to the penal colony № 63, there was no his stuff in that storage. According to Demko’s words, on February 22, 2013 prison personnel took him to the box and demanded him to refuse from his claims on administration of pretrial detention center about disappearance of  Demko’s stuff. After he refused to follow their orders, personnel started to beat him. As a result his head, ribs and back were broken, now it is hard for him breathe and occasionally and blacks out.

Then he was sent to one man cell, at night 23-24 he was transferred to penal colony № 63 without his warm clothes in slippers and sport costume when it was 20 degrees below zero. Demko told  about that to escort duty personnel, however they didn’t react and said they will not face the consequences for their actions.

The letter and claim from Demko on illegal actions of personnel we got without return address, as he writes, he sent it under the counter, because he knows that thought special department of pretrial detention center Demko is not able to send, the reason is there is blood spots on this letter.

While reading the letter we really found spots of red color.

Having got this letter, we visited the penal colony № 63 (Ivdel city) to check it. But in penal colony № 63 we didn’t find Demko, because he was moved to the colony hospital № 55. Upon arrival  in colony № 55, it is not located far away, we tried to meet Demko but there was quarantine. 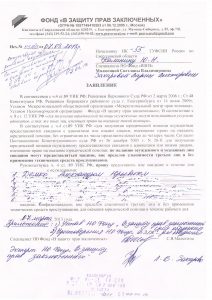 Thus and so we couldn’t meet Demko and got detailed information. We applied with a claim to Ivdel’s  procurator’s office, but Laninkin A.V told us -to write a claim and we will decide what to do. The claim was written for sure and sent it to investigation department of Sverdlovsk region.

We are going to watch developments.