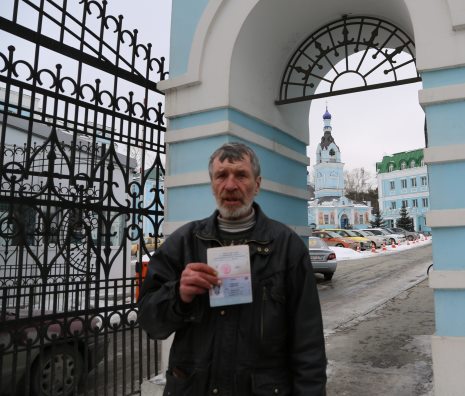 In social network — Facebook we found information from Marina Zabelina -«Yesterday in Yekaterinburg one man came up to me and asked money for bread. He looks like typical homeless however speaks like Proffesor of the Russian language and literarure.The story is hard to believe. But I trusted him. He says that he was discharged from the hospital № 23 of Yekaterinbrg. he woke up there but he did not remember what happened to him. His name is Aleksandr Volkov. In passport    it is says that he is registered in Yekaterinburg. But when he came there «so-called» Olga Volkova met him and said: «Get out of here. You are nobody here. Near the address in passpost there is a stamp — signed out from the flat. Aleksandr could not remamber details and he does not know where to go. Place for sleeping over costs 25 roubles a night. he doesn’t have such a sum of money. Maybe, someone will recognize him as a close relative or colleague and help him to start a new life. In Russia everything is possible. … HELP him! This Friday, 29.03.2013 he is going to be in hospital № 23 since morning, you can find him every day near Joann Predtechi Temple in Yekaterinburg.» 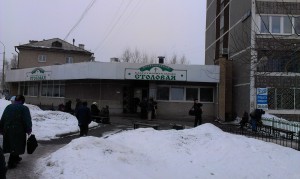 We decided to find that man and help him.  But we were short of time ( we had to leave EKB for few days) only today Aleksey Sokolov went to the Temple, asked people standing near but nobody had information. One homeless remembered that he saw Aleksandr near the gate (on the photo) and that’s all. Zero information.

Aleksey entered the Temple, spoke with women working there, also nobody saw him but they remembered that yesterday journalists from locfal TV-channel came over and tried to get further information about Aleksandr. Apparently,we are not only one who are interested in him and it makes ud a little bit happier. After the Temple, Aleksey Sokolov visited charitable canteen for homeless on Pekhotinze street. Talked to guards, local homelesses and again noboby knew.

Tommorrow we will try to do it again, maybe we will manage to find Aleksandr. WE have to help him. We would appreciate any information you might have.