Having protected people, we get very often  formal replies from Prosecutor’s office and other Supervisory bodies and and somehow got used to it, because State people don’t want to work, don’t work.

But when we get such formal reply from those who has to protect people, and also have called themselves «Ombudsman personnel in Sverdlovsk region» it raises a question — What for those people and why do they «help» in this way? Here are some examples of «their work». In February 2013 Larisa Zakharova (Human defender) sent claims concerning living conditions to Prosecutor’s office of Sverdlovsk region and to Ombudsman on behalf of prisoner K., who serves his sentence in the pre-trial detention center of Yekaterinburg. Here are irregularities of law:

— prison cells, where K.have been, are located in basement level, there is dirty. The window is covered with iron board, the lights doesn’t go in. Additional poiny is that heating pipes are cold, there is no window, that’s why temperarure level is below norm, toilet is not maintananced, there is np private space.

— Because of poor light while he was preparing for court hearings K. got some problems with eyes. Besides cells are not furnished with bed and seat places. There are insects: spiders, cockroaches, ants and even rats.

-once prisoner K. was held with another convicted with active form of tuberculosis.

Soon thereafter Larisa Zakharova got two responses, one is from Ombudsman of Sverdlovsk region signed by Merzlaykova T.G. Those responses surprised her, because authority   who is supposed to protect human rights wherever they are, don’t want to fulfill her duties. Sannikov S.N (officer from Ombudsman ) visited to pre trial detention center -1 and didn’t find any problems there.

Let’s have a look:

As for response of prosecutor’s office, it was definitely in favor of prisoner K. it was checked in appropriate way by authorities and gave an answer. There was that in March 2013 pre trial detention center -1 was under control, on the run of control, they found irregularities in sanitation and housekeeping support. Besides they made a report to the Head of Federal Service for Execution of Punishment.

Also a fact of keeping a prisoner K. with another one (who has active form of tuberculosis) was detected. About that fact prosecutor sent a request to Ivdel prosecutor to take measures towards administration of the colony -55

Besides, earlier in January 2013 a claim from prisoner A. (who is held in pre trial detention center -1) on living conditions was addressed to Ombudsman of Sverdlovsk region. Prisoner A. was visited by representative of Ombudsman but till this time we didn’t get a response.

How come that two law bodies meant to follow the law and to provide human rights protection, have different approaches to human rights? I still cannot understand it….

It seems that there is no worse examples. But we have even more from Ombudsman work.

For example, woman addressed to Ombudsman of Sverdlovsk region asking to assist with marriage with prisoner. Instead of taking measures and at least answering in appropriate way, that woman got a response that for realization of her request, Ombudsman needed a characteristics for that prisoner and….. Ombudsman stated that there were no reasons for parole?!!! So nice.. that woman is saying about  marriage, he is about parole.  Where is the connection between help with marriage and parole….

Below every claim there is a reference to executor, having looked at which we found out Sannikov S.N and remembered that «worker» who received prisoners in the colony together with Ombudsman T.G. Merzlaykova, here is photo: 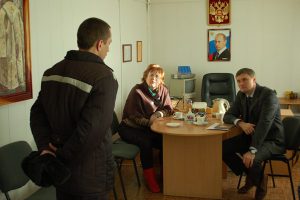 Comments are needless. Prosecutor workers in colonies during the personal reception always offer prisoners to sit down then start working with him.

Such a good workers are in the Ombudsman office and they make formal responses to all requests of citizens.