MENUMENU
Главная News Concept «recidivist» can be applied not only to prisoners but to the...
Поделиться
Твитнуть

On April 8, Verkh-Isetskij regional court of Yekaterinburg under chairmanship of Nezvetaeva Nina Anatolievna delivered a judgment:  the court declared that actions of the Head of colony № 62 Gusev Akeksandr Ivanovich are illegal when he didn’t let a lawyer Roman Kachanov for legal help for prisoners on November 29 and December 24 2012.  Court hearings took 3 months.

It’s not the first time when through the court it is stated that Gusev’s actons are illegal. Thus, last year on behalf of Vyacheslav Bashkov (member of Public Monitoring Committee) Chkalovsky regional and Sverdlovsky courts declared that Gusev’ s actions were out of law when he didn’t give response on appeal and also he refused to tape prisoners who wanted that.

All those hearings in the court demonstrate only one point- Aleksandr Ivanovich works on principle «don’t let», «don’t give information», «don’t let it out». Human defenders are waiting for hours for his permission to meet prisoners, having enough time for sleeping. 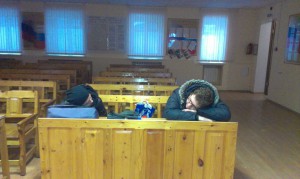 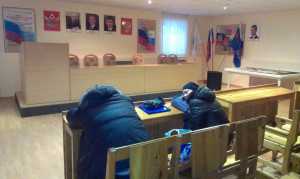 The less information about prison- it’s better. Apparently, Gusev who is applying these principles, made videoconference, in order less prisoners could leave the colony and meet human activists and lawyers.

We have saying: » guilty mind is never at ease.» Why to hide information, if everything is fine and administration lives according the law? In colonies where no law violations that don’t happen.

To hide, to deceive -it has meaning if only for covering «shady cases». Then the administration begins to make fake papers, force prisoners to write manifests with wrong dates, threatening them. Besides personnel forces prisoners to refuse from legal help, they make up documents that there are no these prisoners in the colony right now if defenders want to speak with them. From bad to worse then. Administration having sense of impunity, it goes on, their actions are getting brazen and after that you don’t see any difference between prison personnel and prisoners. Both are criminals. The difference is only that first is criminals in uniform, others- without.

The administration of the penal colony № 62 chooses «dark route» lead by the Head. And don’t be offended, Aleksandr Ivanovich, we, human defenders, can say already sort of «fell in love with you». You are like relative for us. But less violations, more orderliness. Otherwise-we will do this way — prosecutor -investigation committee- court- Public Monitoring Committee -Moscow. It’s good we have  huge experience and nothing personal! 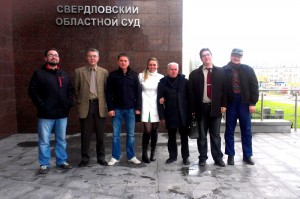