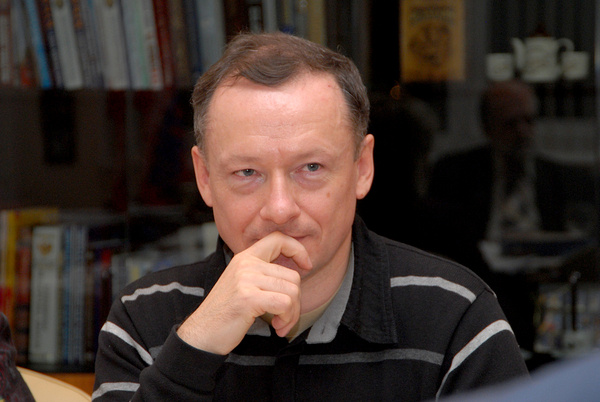 The repression against human rights defenders in Krasnodar by Federal Security Service of Russia (FSB) reached the level of  1937: without any legitimate reasons a doctor of political sciences and professor of the University of Kuban has been arrested there.

Yesterday, 12.04.2013 in Krasnodar FSB has arrested a famous human defender, a board member of the Southern Regional Resource Center -Michail Savva. The arrest was preceded by a sudden rummage of  the apartment of Michael Savva. At 6 in the morning there was a knock on the door of the apartment where Michael Savva lives with the family. Officers from FSB (Krasnodar region) came to his apartment for him.

Rummage of his apartment was carried out during 6 hours. But there was no warrant on search. The law allows FSB to conduct it without a court order only in exceptional cases, when there is a danger for the sovereignty of the country or  the life and health of citizens. How Michael Savva could be danger for the sovereignty of  Russia, the life and health of citizens still  remains a mystery.

According to the wife of Michael Savva,  during the search  computer, flash cards, pictures and even old VHS tape from the family archives, optical discs, documents, all cell phones, bank cards, including cards of family members were taken away. Also copies of Michael Savva appeals to the FSB connected with  the facts that took place on March 14 were taken. Then, a rummage kept going on in the garage of the family Savva.

After a rummage, Michael Savva  together with a lawyer Andrei Savchenko were taken to the administrative building of the Federal Security Service of Krasnodar region. At 2 pm  the lawyer told his wife over the phone that the court declared to arrest him on 48 hours.

Today, 13.04.2013 Octobrsky judge Kazanskaya N.B  impose a pre-trial restraint on two months  against M. Savva, although the judge on duty was Kutchenko. The judge Kazanskaya N.B. refused to consider the petition for recognition by the court defender lawyer, Julia Drobot. The right on protection of M. Savva was violated. The prospect of appealing to the European Court.

Persecution against the Savva  and the Southern Regional Resource Center began on 14.03.2013. This day, the officers of the Federal Security Service in Krasnodar region had pre-investigation check of the Southern Regional Resource Center. Their actions FSB justify by checking information on misuse of grant funds received from the Ministry of Social Development of  Russia, which were distributed by the administration of Krasnodar region. Then the computer was taken away  from the office. Under such inspections  at the same time were several non-profit organizations (NPOs). Mikhail Savva brought those facts of violations during this inspection.

On March 8, as a part of the general federal audits of NGOs over the country, prosecutors visited office of the Southern Regional Resource center.  Until 09.04,  leaders of various legal entities were  questioned and checked in Krasnodar region.

05.04 it was reported that Michael Savva was removed from the position  of Deputy Chairman of the Human Rights Council under the Governor of the region. This was probably done in anticipation of his planned arrest.

In 3 days,  Savva was supposed to perform in Moscow at a meeting of the Human Rights Council under the President of Russia to report on violations during inspections of NGOs in the Kuban. It is possible that one of the reasons for the sudden arrest Sava was the desire of the authorities of the Krasnodar region to prevent this.

M. Savva — one of the most famous human defender in the Kuban. Doctor of Political Sciences, Professor of the Kuban State University. For several years he was chairman of the Public Council at the police department in the Krasnodar region. However, even these facts did not stop the FSB, who violated the law against him.

Chairman of the Krasnodar regional branch of the party «Yabloko»  Andrew Rudomakha commented this situation: » Today, the arrest of Mikhail Savva is a continuation of the wave of repression against civil society activists in Krasnodar region. The victims of this repression are  Vadim Karastelev, Anastasia Denisova, Suren Ghazaryan, Eugene Vitishko and many others. And this arrest is one of the most egregious facts of the campaign  against NGOs that unfolded across the country from the direct orders of Vladimir Putin. I am sure that the reason for it is not any wrong actions of Savva, but the fact that M. Savva was too inconvenient to authorities.

The formal reason for the prosecution of several independent NGOs in the Krasnodar region was that they receive grants from the regional administration, as a «budget» is a very symbolic and suggests that in Russia it is extremely dangerous to receive grants, which are given by a «native country» . «Because it gives him more opportunity to prosecute unwanted people and organizations. «

According to the  information received at 17:30 near the building of the FSB of  the Krasnodar region on Mira Street there was  picket in support of M. Savva. Activist held a sign «FSB, you will not be able to arrest all civil society.». During the operation,  the coordinator of the Krasnodar regional branch of the association «The Voice» David Kanka has been arrested, as well as the correspondent of news agency «Federal Press» Andrew Kaushik. According to preliminary information, the two arrested  are delivered to the Central Police Department of Krasnodar, they are afraid that all the materials and videotape of the picket will be removed.