MENUMENU
Главная News Next fact of arbitrariness of the Head of a colony found in...
Поделиться
Твитнуть

This Thursday, 16 May 2013. There were two major trials against chief of penal colony № 62 of Mr. Alexander Gusev, who has often been marked by the court as the perpetrator.

Both processes are concerned  no admission of human rights activist Larisa Zakharova to his client Vitaly Knyazev to provide him legal assistance. In particular, the head of the colony № 62  Gusev A. I and his deputy, O. Zolotarev prevented those meetings on November 16, 2012, as well as 14, 15 and 16 January 2013.

As a co-defendant in these processes the Federal Penitentiary Service has been involved also, which didn’t take any actions about protection of the rights of the convicted Knyazev and his representative. All denials in the meetings were without reason or justified by clearly illegal pretenses (the convicted person is prepared to transfer or convicted is on quarantine).

If the administration at least explained why now cannot provide a meeting with a convicted person, or at least would give a meeting for a short time, it can be understood, and the conflict would be ended. But no. Gusev and his deputy. Zolotarev acted out as usual, without explanation, showing total disregard for the law. 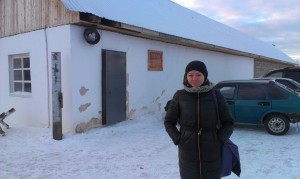 In the end, the court ruled that the denial of meetings for Larisa Zakharova with Vitaly Knyazev on November 16, 2012, 14, 15 and 16 January 2013 were illegal. The court also stated illegal the fact when Gusev didn’t put notes on the application on the reasons for refusal on November 16. In addition, the court stated all illegal facts on taking no measures of Federal Penitentiary Service of Sverdlovsk region to protect and restore the rights of the convicted Knyazev for legal help.

Just to remind that a similar judgment of Verkh- Iset district court in Yekaterinburg was ruled on April 8 this year by three facts when chief of the colony Gusev didn’t let Roman Kachanov to provide legal help for their clients: for one convict on 29 November 2012 and two convicts on December 24, 2013.

Thus, there are seven established facts by the courts of first instance about no admission of attorneys and other persons entitled for legal help. Apparently, according to the Federal Penitentiary Service of the Sverdlovsk region, it indicates a high «professionalism», «moral and business qualities of» leadership of the colony ….

The judgments in these cases are not yet available. Upon decision they will be put on the website of «Human defenders of the Urals.»