MENUMENU
Главная News Chair of Public Monitoring Committee Of Sverdlovsk Region: “This Is Beyond My...
Поделиться
Твитнуть

Convicts from squads №№1, 2, 4, 5, 6 and 7 of penal colony №46 of Sverdlovsk Region refused to leave their squads for an inspection and breakfast on May 30th, 2013. This occurred after convicts-activists* beat two other prisoners. The two victims ran away to squad №7 and hid there. In a fear that the administration would try to conceal the conflict and the beaten people would be carried out of the colony again, the convicts took a decision to barricade the entrance into the squad and to claim an investigation of this deed. Convicts from other squads joined this protest action.

So, by the morning of May 30th, 6 squads took part already in the massive act of disobedience, and banners hung on the walls of one of the squads read:

After the public disclosure of this incident, Head of General Directorate of Federal Service for Execution of Punishment of Sverdlovsk Region, his deputy, as well as Chair of Public Monitoring Committee of Sverdlovsk Region Ashurbek Manasov arrived at the colony. According to the convicts, they addressed the public member asking him to protect disabled Koltyshev from inhuman treatment. When asked: “Why does nobody administer medical aid to the handicapped person?”, Mr.Manasov declared: “This is beyond my scope.” 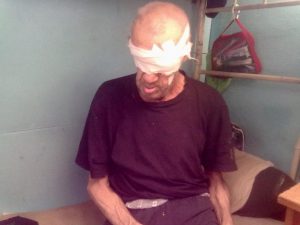 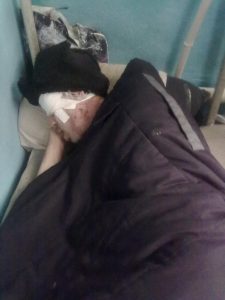 Sergey Fyodorovich Koltyshev, born on April 8th, 1938, is a person with a first category disability, convicted under art.111, part 4; the end of his imprisonment is 14.05.2015, the time of his release on parole has come. His relatives have abandoned him. They are not about to claim him, and he himself cannot write anything due to his vision impairment. He cannot walk, he has only one eye, and it is bleeding. Meanwhile, his health is quite bad, and he may die very soon. This is how convicts describe the situation.

According to them, the situation with convicts´ human rights in this colony is very hard. Convicts suffer from physical aggression, malnourishment, horrible medical services, constant humiliation on the part of the colony´s staff and convicts-activists. It is a problem to get a long visit, sometimes they simply don´t permit it explaining it with lack of rooms in the colony´s accommodation facilities, but convicts say that it is very easy to get a long visit for money. The cost of the so called “unscheduled visit” reaches 30 thousand roubles.

Human rights defenders have visited several times this colony, but either they were not admitted or convicts´ letters of complaint and their own voice recorders were secretly withdrawn from them. The colony´s administration was constantly trying to conceal the difficult situation with the convicts´ rights. Nobody wanted to resolve the issue. Neither the colony´s administration, nor the General Directorate of the Federal Service for Execution of Punishment of Sverdlovsk Region.

According to Oksana Trufanova, an Expert of Workgroup of the Russian President´s Human Rights Council on Assisting Public Monitoring Committees, the task forces brought into the colony didn´t use force against the prisoners: “The APCs were on the ground for some time, but later they left the residential area of the colony. The prisoners didn´t cut their veins, there were no victims nor destruction.”

Up to the moment, the prisoners have launched a hunger strike, except for squad №6, whose convicts today have come to the canteen, whereas the other squads don´t appear there. The strikers demand the change of the institution´s authorities because of inhuman treatment and systematic beating. 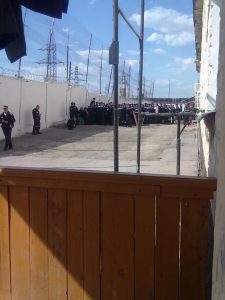 We will be monitoring the developments.

* Activists are the convicts taken to bosom by the institution’s authorities, they are endued with commanding and executive functions and they fulfill what the administration indicates to them and, as a rule, commit unlawful acts against other convicts.

In the past, the “activists” could exist on a legal basis, under the guise of self-regulated organizations which were abolished with a Ministry of Justice’s order in 2009.

The Federal Service for Execution of Punishment denies the present existence of the “activists”; however, they continue existing in practice and commit crimes against other convicts (tortures, extortions, violations, etc.)

The photos were taken in the colony.

— The Court Confirmed the illiteracy of penal colony№46’s officers

— A SYSTEM IN A SYSTEM: THEY ARE THREE STEPS AHEAD