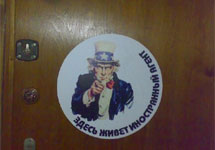 As Igor Sazhin says, yesterday evening neo-nationalists put on five flats of members of «Memorial» big stickers (40 cm) — «Here foreign agent lives». Relatives of defenders are scared, because nationalist put these signs on parents’ flats. Nationalist do it open, without hiding. They post in Internet pictures with their work. 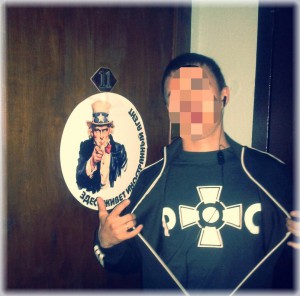 Nationalists intend to keep doing it and it seems like authorities of the city don’t care about that. Our complaints to FSB and police don’t help out.  The point is nationalists are supported by administration of the Head of Republic Komi. Nazi become active when  we step on the tail of next violator from administration of Republic Komi. Now tamed Nazi play role of dogs and use common hysteria concerning human defenders in Russia.

In November 2012, on a day when law about «foreign agents» enters into force, unknown made signs on the building of Moscow «Memorial» in Malyi Karetnyi pereulok. Vandals painted out «Foreign agent. I ♥ USA » and put stickers. Later on the same signs appeared on the door of «For human rights » in Malyi Kislovskoi pereulok. Human defenders demanded to initiate legal proceedings on Article «vandalism».