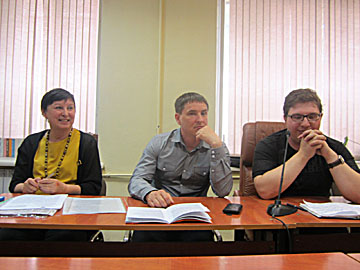 6 months since the date of entry into force of scandal changes about nonprofit organizations, so called «law about foreign agents». Besides Prosecutor’s revisions began recently in April across the country.

Some organizations got an instruction to be registered as a «foreign agent», however none of them agreed to be «a spy». Meanwhile the fastest activists decided to put labels on «enemies of society»: for instance in Syktyvkar activists of ultra right organization «Rubezh Severa» put stickers with sign «Foreign Agent» on flats of local human defenders. Aimed to discuss alarming events Yekaterinburg nonprofit organizations had a rounded table: «Foreign Agent or victims of arbitrary power».

-On May, 23 2013 in Russia more than thousand organizations were checked up. More than in 30 regions they even before revision  felt pressure, for example in mass media. Those revisions are carried out unscheduled and have complex type — Ministry of Justice, Center «E», Ministry of Internal Affairs participated as well, — a lawyer of nonprofit «Lawyers and civil society» Yelena Makey told us.

Totally in Sverdlovsk region they checked 11 organizations  and they made two warnings from Prosecutor.

— Apparently, those warnings were more, just organizations didn’t state about it on hotline Lawyers and civil society», — announced a lawyer.

We’d like to point out that «New in the Urals» sent official request to Regional Prosecutor’s office asking to provide more accurate data of revisions but no response, and these restrictions on people who agree to have this label might be viewed as

Yelene Makey is convinced: to be registered as a foreign agent is nonsense, obstructions for activity.

— Any well respected organizations which consider its activity useful must resist such a registration, -Makey thinks. — This concept «Foreign Agent» put such a label that resulted in failure to participate in official events, activity will not be covered by mass media.

-This label «» Foreign agent» is not scary, but a word «agent» implies that person must do tasks, but we don’t do it. Generally I think that this law violates Constitution. «Memorial» is not going to register itself as a foreign spy at least because we deal with human right not with politics.

«Foreign agent» tag reminds about Yellow Star in Nazi Germany, ghetto and gas chambers followed by as we know. 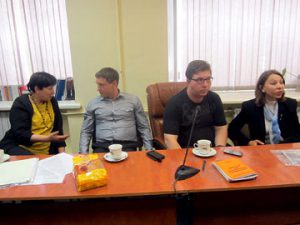 As Anna Pastukhova says the only one violation found in her organization was recomendation to government on recruits’ rights. It was regarded as «influence on laws and regulations» and «influence on internal police of Russia», and it was recommended to be registered as a foreign agent.

-Our organization will appeal prosecutor’s decision. We are not going to refuse from financing abroad. We appreciate finance help from abroad especially from NED, -says Anna Pastukhova.

Leader of «Legal Basis» Aleksey Sokolov shared the point with Anna, he was considered as prisoner of conscience by «International Amnisty».

— Results of revision at the moment are not received yet but during conversation prosecutor advised me not take part. I replied that about tortures in pre center and penitentiaries, if it happens I will organize meetings. Basically I am not going to put myself into foreign agents, I consider new law is nonsense and illegal.

«Agent» in Russian mind is enemy, I don’t think I’m an enemy. 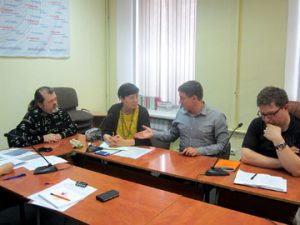 Advocate, president of «Trans regional center of human rights» Roman Kachanov explained  what is going to be if nonprofit organizations refuse to register. They are subject to administrative liability, penalties, criminal liability.

Besides, who decides to register also is not so lucky: they have to give reports 4 times with independence audit, which paralyzes activity of organization. 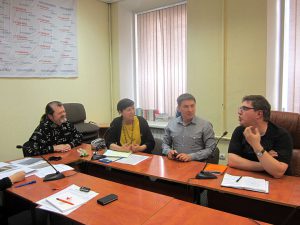 — Roman lawyers say: «Where a right is not identified, there is no a right», it follows there is no law, — Roman Kachanov thinks. — This is not law, this is legalized terror and we, human defenders we have to fight to. Today towards nonprofit organizations acts of vandalism occur, and tomorrow begins with violence! Why government doesn’t’t understand?

Officer from Ombudsman in region Vladimir Popov shares worries. He pointed that he understands human defenders because in 90-s he used to work in company with foreign financing. Hopefully fight of human defenders will result in success, but he appeals to search some other sources for finance. 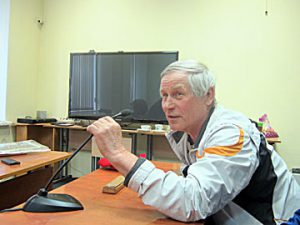 Moderator of rounded table, leader of human rights’ organization «Sytyazhnik» Sergey Belyayev are not familiar with results of revision, however he agrees that law made in order to load nonprofit organizations with bureaucracy.

-As a result volume of reports can be handle only by powerful organization. 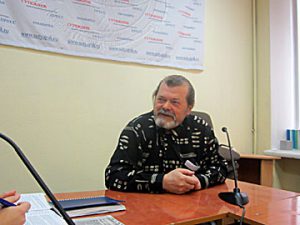 However some organizations don’t see anything bad in it.

-Our structure doesn’t deal with politics but if concept of our activity is widened , we must do it,- explained director of «International information center» Nurzida Bensgier. 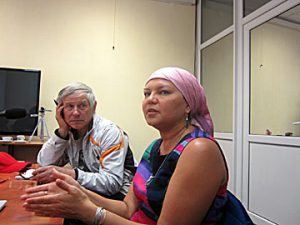 Huge amount of problems lead to tension in society and it looks like government wants to take it out on nonprofit organizations. Task is completed. Another issue is that if problems in society are not fixed further, calling for «nation’s enemy» will not help out. It will result in national agony towards authorities not for human defenders and activists.

«New in the Urals»