MENUMENU
Главная News Lie .. for the sake of what ?
Поделиться
Твитнуть

On July 3, 2013 in Yekaterinburg a lawyer Tatyana Okushko has arrived who protected Tarkhan Kartoyev during investigation. The next morning we went to penitentiary № 2 where we met the Head of it. During the conversation with him, we put forward assumption about Tarkhan’s murder and we asked for explanation about injuries on dead body. After these questions the hands of the Head started to shake and he told us that they got him in this condition on June 28. On June 29 Tarkhan walked, during daytime everything was fine but in the evening he got heart failure. Why they didn’t record injuries? No answer.

We have been to Prosecutor office, twice to Investigation committee where Tatyana Okushko met a Prosecutor. She mentioned about independence expertise by relatives and he assured her that he will carry out additional investigation. Tatyana sent many requests to these sources. 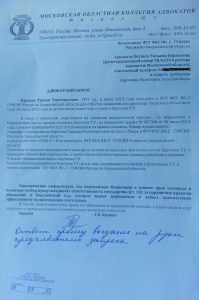 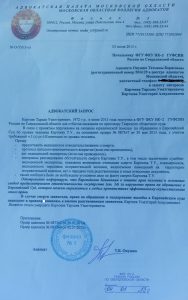 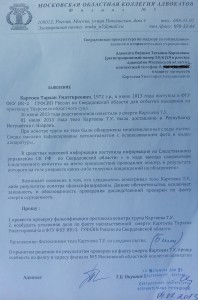 Independence mass media invited to comment what happened. In social networks there is heated discussion, most of people become outraged. Someone puts about contract murder of Kartoyev and says that it’s going to happen with others.

Some human defenders have doubts in violent death. Some called him terrorist. Everyone has his own version but he was convicted to 7,5 years in illegal armed groups but NOT in tortures and death.

He has no relevance to explosion «Nevsky Express», it’s enough to read a sentence, but so called «independence» mass media didn’t have desire to do it.

Many people see nonsense of what is going on and people who cover themselves by title «Government».

I don’t really think that Kartoyev was ordered from Moscow. Apparently local workers did their best. Time will show.

The most important fact is that in the center of Yekaterinburg in closed facility people die very often, to be exact in penitentiary № 2.

Today they kill in the prisons, tomorrow they might kill on the streets.