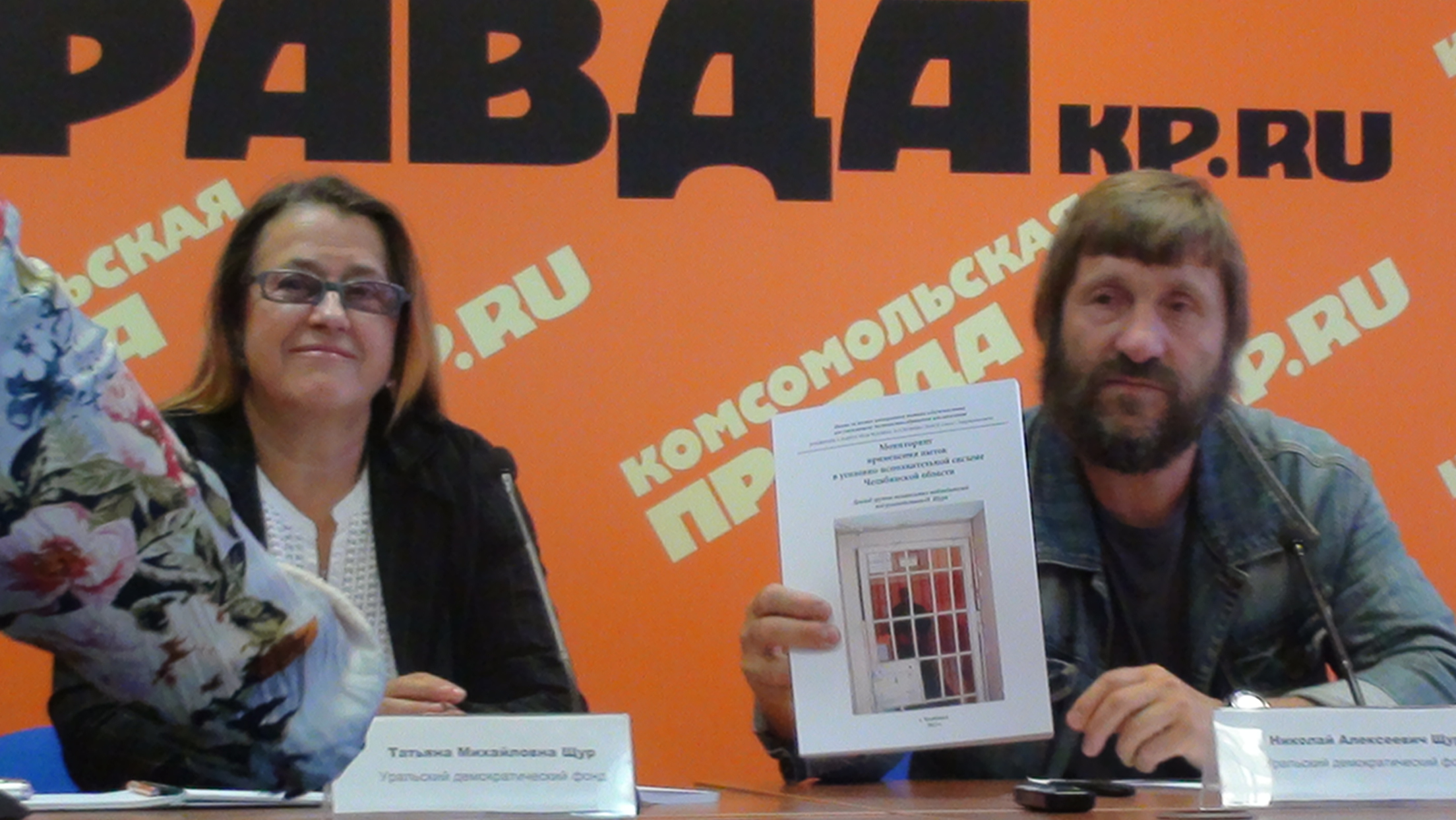 Today on August 8, 2013 at 10.00 in Chelyabinsk press-center of «Komsomolskaya pravda» a press conference was held where human defenders of Ural democratic fund have shown results of torture monitoring in penitentiary system located in Chelyabinsk region.

Monitoring was being held during 30 months in 2012-13 in every penitentiary of Chelyabinsk by group of independent inspectors hosted by Nikolay Schur: Dina Lapytova, Valeriya Prihodkina, Tatiana Schur, all of them are members of Public Monitoring Committee. Materials prepared by group of Nikolay Schur and Ural democratic fundhave been used to demonstrate results of monitoring. Results are shown on 129 pages report illustrated with photos from penitentiaries, papers etc. In this report there are links to Internet sources, including witnesses’ video about tortures applied to them.

In the report attention was paid to accidents in colony № 6 as this particular colony became famous with its cruel human humiliation system, constant money extortion from prisoners. Investigation of this case is more interesting because now case under investigation on beatings and extortion in colony, but results are classified so far. Besides report has examples and suggestions how to get rid of tortures system in penitentiary system of Russia, analysis of reasons of use tortures, positive experience of saving convicts’ lives.

Group of inspectors supported by civilian organizations could resolve the main problem of convicts of region: they could stop mass practice of tortures. Nevertheless general condition, mindset of penitentiary system and its servants stay the same, judging by constant humiliation over female convicts in colony № 5 where in isolation ward not only shampoo and cream but regular hair band are banned. Hair brush is given in only in the morning for 30 minutes. Many convicts complain about absence of HIV treatment.

There are more and more cruel and awful types of humiliation over humans everywhere in Chelyabinsk unfortunately nobody is prosecuted, especially authorities. That report was posted since 12.08 on www.uraldem.ru and sent to Russian President, Federal Service for Execution of punishment, General Prosecutor office, Public Chamber, Human Rights Council under the President of Russia, Governor of Chelyabinsk region, Ombudsman of Chelyabinsk region, federal mass media, activists of civil society. We didn’t send it either to Federal Service of region, or Regional prosecutor office because we are convinced that these authorities don’t know how to communicate with civil society and fulfill their duties.

Besides all materials and report have been given to authorities in time and for many years. There is no reaction (prosecutor office for example sends our claims on prison servant to prison servants back ). For which reason we don’t see any practical sense to bring the appeal. We want government and public opinion to MAKE them work.