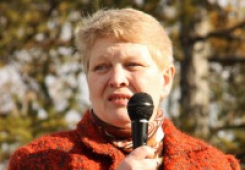 On September 30, 2013 judge of Traktorozavodskoy court — Julia Konstantinovna Koloshina satisfied an appeal from member of Public Monitoring Committee of Chelyabinsk — V. U. Prikhodkina over decision of JP — Krylova S. V where Valeriya Prokhodkina was declared guilty in committing administrative offense under Art. 19.32 (violations of requirements of correctional system of the Russian Federation, regulatory legal acts upon execution of punishment issues, also failure to enforce of lawful requirements from administration of penitentiary).  Judge declared punishment as warning!!!

This decision was canceled, proceedings were stopped due to  absence of a crime in the act.

We are happy that justice was served. Valeriya has a right in vindication, including reimbursement of expenses on attorney service.