While a fight for regalia goes on in the Public Monitoring Committee of Sverdlovsk region, most of the members get down to work within their authorities.

November 25, 2013: together with other members we visited pretrial detention center-1 of Yekaterinburg where we have checked many wards in several prison buildings, generally there are 7 of them. We could manage to speak with inmates, found out their main problems and right there we organized a working meeting within 7 people.

November 27, 2013: together with Larisa Zakharova we went down to Tavda in Sverdlovsk region where we visited the penitentiary of high security №19. There we have inspected solitary, ward-type rooms, and at random we have checked other squads. Generally we didn’t get any serious complaints from inmates. We decided to conduct personal legal assistance. Inmates from solitary and high security wards wanted to meet us, basically their complaints referred to pension, paper issues and disability. Most of the questions have been fixed at once during dialogues with convicts and deputy chief — Zavdsky S.V. who quickly solved rising questions. The conversations with inmates were in confidence. 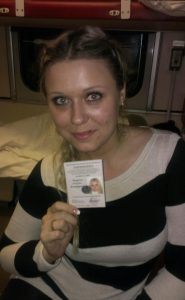 November 29, 2013: Larisa Zakharova and me visited the penitentiary №10 of Yekaterinburg where we inspected solitary: 4 inmates and 10 in squad №1with diseases and disabilities, complaints were not found.

There was a pleasant surprise over living conditions for inmates in the penitentiary № 10 but unfortunately not everywhere.  In solitary there is faint lightning and we pointed out at this fact.

December 1, 2013: members of Public Monitoring Committee (D. Rozhin, A. Anikin, S. Kirillov and V. Rybakov) and me went to Nizhny Tagil where we inspected the penitentiary № 13, the penitentiary № 5 and colony-settlement. We came over there because of complaint of convict’s wife who addressed to our organization  due to absence of news from her husband. He didn’t get in touch with her for a long time. She was really worried about it. She lives in Podmoskovye and she doesn’t have opportunity to get here.

Fortunately, convict Nikolay D. looked and felt well. He didn’t contact her because he fought with another inmate but everything finished without consequences. Convict D. was transferred to security place and upon this fact we couldn’t get in touch. Next day Nikolay made a call to his wife and convinced her that he was doing pretty good.

Besides we have inspected in there: solitary, ward-type rooms. 8 inmates wanted to talk in person without administration representatives. We got an complaint from pretrial prisoners about absence of personal-care products and underclothing. We passed this complaint on to prison chief and he resolved it in the presence of us. He ordered to provide them all necessary things.

Then we moved to the penitentiary № 5 that is located in next region. This colony has a reputation as a torture chamber of Sverdlovsk region. We have unconfirmed information over tortures but we cannot prove it.

In the penal colony we checked the squad № 12-A, solitary and ward-type rooms, no complaints!? Only one convict asked to help out with his transfer to hospital for examination what we have immediately done. We addressed to prison chief — Yuri Laptev who made a promise that on 02.12.2013 convict will be examined. 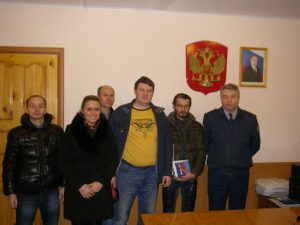 We have taken a picture with Y. Laptev for memory.

There we go! It was our first week as members of Public Monitoring Committee.

There I am and I’m working in Public Monitoring Committee. I don’t tend to divide territory on mine and yours like some people who stepped in with their unknown aims.