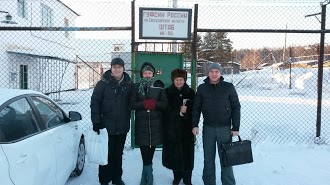 Why they don’t like to inspect this colony so much? Still a secret. Yes, it’s far away. There are no roads. Yes, it’s very cold in winter and huge mosquitoes in summer. But who are saying that it’s easy to fight for human rights?

On the top of West Siberian Plain this old colony with 499 inmates is located where nowadays 252 convicts are detained, 82 of them are life-sentence prisoners. There is territory for penal settlement for 20 inmates. 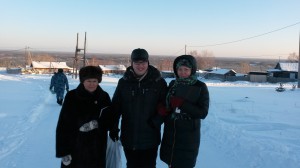 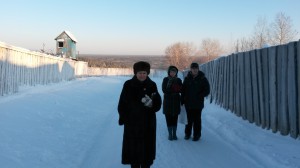 The Chief colony Subkhan Dadashevich Dadashev has met our workgroup (members of Public Monitoring Committee, Olga Ivanovna, attorney Roman Kachanov, Aleksey Sokolov and me) and invited us to his office where he offered us some coffee. After -30 temperatures we were pleased.

While drinking coffee we checked books: “Use of special means and physical force”, “Registration of crimes” and “Registration of incidents”. We got a lot out of there and immediately we discussed route map. Subkhan Dadashev was as usual friendly. He mentioned that everybody has own job but we are related together by Law of the Russian Federation which should be obeyed by everyone. 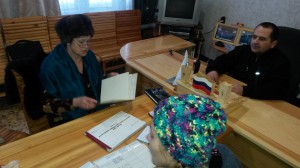 We have inspected canteen first – small premise for those in squads, there are 3 of them, one is meant for tuberculosis inmates.

Inmates were revived because nobody came before, they questioned us a lot. Many asked for personal consultation. We gave our word to call a lawyer and human rights defender for them. Unfortunately we couldn’t receive every inmate.  We felt sorry but we promised to come over more often. Inmates have complicated life and destiny and they paid for their sins with the most essential –health and freedom. For one we were really happy because he got married and soon he is being transferred from special security to high which means they mend his/her ways.

We walked through two-tree man cells. They have sentences for severe abuse for what they lost a right on freedom. Some of them are punished already, they barely move or rot.

Here they talked about living conditions, medical treatment as well. They have so many problems there. Some –no chance to send their claims out, some were proud of winning courts vs administration.

Looking in inmates’ faces and listening to stories we realized what FREEDOM means and how important it is for humans and life-term sentence is the worst punishment. We understood how unprotected life-term prisoners are either legally or socially. Yes they violated the law but they still are soul mates or close relatives for someone.

We couldn’t manage to do much up there but certainly we are going to visit this remote prison over again and again where the Chief colony is ready to let us in and answer all our questions. Such Chief is the best example for someone who rules the prison.