As it was reported previously up here on our site in the course of three days trip to Ivdel colonies on December 19, attorney Roman Kachanov and human rights defender Aleksey Sokolov traditionally  went to the penal colony № 62 to provide legal assistance to convicts.

Having waited half of working day Roman Kachanov and Aleksey Sokolov were really surprised that only one inmate agreed to get this help because before in the list there were 9 people. All the rest as the administration of colony explained, refused from legal help of attorney and human rights defender as if they wrote relevant statements.

As for the only one inmate R. agreed to talk to us it has to be said in details.

Law (p.4 art. 89) gives a right to have a meeting with attorney in confidential state. However despite on having either written and oral appeal that convict R. needs to meet with Kachanov without anyone from  the administration of the colony №62, his request was ignored violating Russian law and norms of international law. When Kachanov upon leaving the colony met the Chief deputy Zolotarev, he didn’t try agrue but mumbling something about «short meeting».

Apparently human rights defenders of the Urals not enough teach prison officers in the court sessions connecting with convicts’ rights on legal assistance. No matter that during this 2013 year we have won 5 same cases. Well it means we have to deal again with slow-witted prison officers of the colony №6.

Meeting with convict R. and Aleksey Sokolov were not in confidential state as well.

Next day human rights defenders went to Lozyvinsky which is 32 km away from Ivdel where the colony № 56 is located. This colony is known as «Black war eagle», it’s for term of life. 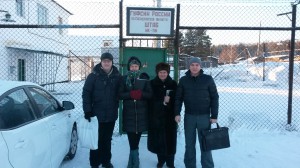 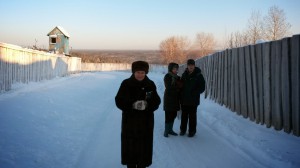 During the public control several convicts decided to get legal help referring their cases and local problems. Thus human rights defender made their mind up to inspect this colony in January 2014.