Rights after New Year’s holidays we made our way to Ivdel of Sverdlovsk region aiming to inspect correctional facilities in Ivdel which are considered to be torture place. Some inmates call this colony as «Russian Oswiecim». Specifically this information was being discussed on the of New Year a lot.

Our human rights work group consisting of two Public Monitoring Committee members-Larisa Zakharova, Olga Dianiva and me. In advance we have sent notification message to Federal Service for Execution of punishment of Russia in Sverdlovsk region about coming inspection in penal colonies №62,62 and 56. Thus we arrived there on January 9th  2014 at 8:30 to №63 colony. In reception office we’ve been waiting for 40 minutes before someone of prison officers came out to see us.

Only after phone call to the Chief assistance of Federal Service in human rights G.N.Gubankov. someone from colony administration offered to come in. As for me I stayed to wait for decision on meeting with four convicts to provide legal help.

At 11:45 officer came out of cabinet asking to pick up phone. I took it and heard female voice, someone informed me that the decision was refusal for meeting with convicts due to absence of two inmates in colony and the rest refused from legal help. She presented herself as Tatiana Nikolayevna Sukhneva. I asked her to make a mark over refusal according to p.68. Tatiana said it was not in her capacity. 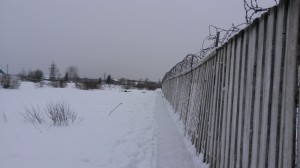 To argue was useless and I went to guest house to expect members of Public Monitoring Committee. There were relatives of convict who came over to meet with that convict at 8am but they saw nobody from administration staff. It was already 1pm. Working day of meeting inspector starts at 8am but there was no her. 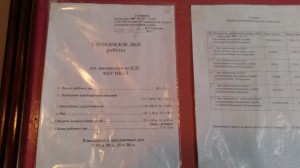 Obviously schedule rules are not her business because she came with own car at 1pm, grabbed papers and said to wait for there. According to relatives she always begins working day at this time.

Members of Public Monitoring Committee finished checking colony at 13:40 and I asked them to come up to guest house where relatives of convicts shared worries with them. This complaint was in final report of inspection. 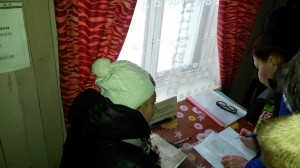 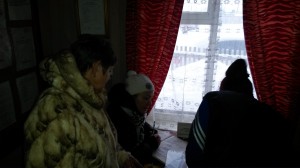 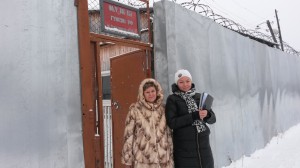 Based on results of inspection we found that convicts didn’t refuse from my help, they wanted to get it. However in violation of law colony administration didn’t want to keep the law. Convict V. D. Maglakelidze even wrote statement about meeting with human rights defenders and clarified that since  January 5th 2014 he launched a hunger strike.

Before that convict Maglakedze he was beaten and bodily injuries were recorded in his medical card. Larisa Zakharova and Olga Dianova demanded this card. 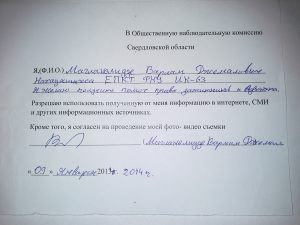 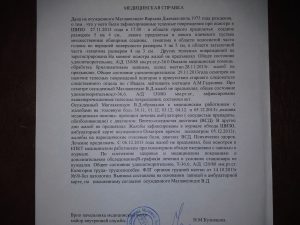 I’d like highlight that upon first visit of this convict on December 19th 2013 members L.Zakharova and O.Dianova asked administration of colony №63 to transfer Maglakelidze to prison hospital at colony №55 unfortunately their request wasn’t heard at all. Also Maglakelidze addressed to S.V.Khudorozhkov — the Chief of Federal Service for Execution of punishment because at a local level this issue cannot be resolved. 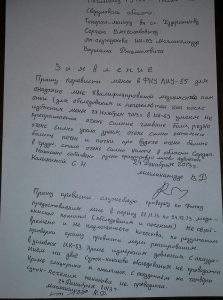 Then we went to penal colony №62 where members of Committee got a right to inspect territory and premises, for me -meeting with convict A. Roslov. We were surprised. Could it be true that in colony №62 something is changing for the best.

Convict during the meeting spoke out all his complaints but only living conditions. Beatings are stopped and it’s already good enough. However it’s really weird that after meetings with defenders on December 19th, 20th 2013 a lot of convicts were locked up in solitary upon different violations. Roslov said that after meeting with me there a report was made up on him as if he slept in his ward at non appropriate time. They gave him 15 days and nights in solitary as punishment. According to Roslov the only one evidence was report of officer although there is camera in his ward.  We reflected all complaints in our reports.

These complaints we wrote out right in hotel hall instead of sleeping. 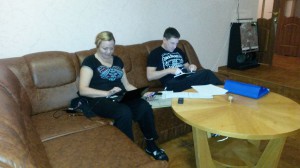 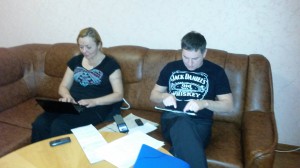 Tomorrow we are going to colony №56 and may be to №55 also we have to get to prosecutor and not to be late for train.