Prisoners from infamous penal colony №6 in Kopeysk who made riots in 2012 were found in the Middle Urals by Svedlovsk human rights defenders. One of inmates swallowed a blade on the way to Sverdlovsk region. Now he is in colony hospital №2; another one was in solitary of penal colony №5 in Nizhny Tagil. «Prisoner was handcuffed to grating, neck was bandaged. We were shocked.

Administration explained that convict self-harm and cut veins on his neck. Handcuffed because administration is afraid of him doing it again»,- says Rybakov in blog. Such measures convicts used as a protest against actions of Investigation committee who made decision to transfer convicts to the Middle Urals. «According to prisoners it happened in order to keep inmates away from attorneys»,- explains Rybakov. 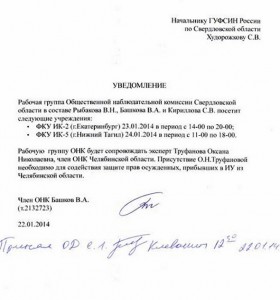 In press-office of Federal Service for Execution of punishment of Sverdlovsk region say that convict from penal colony №2 is in hospital now. Some time ago he wrote a notification about launching a hunger strike. But later on he refused to do it. «Now he receives food. Under care of doctors and psychologists. Second one is in solitary, measures taken not to bring harm himself. I want to stress nobody complained on living conditions»,- says representative of press -office. Unfortunately, we couldn’t get comments from representatives of Investigation committee. Soon human rights defenders are going to visit convicts. For this purpose they want to get colleague Oksana Trufanova. To remind these convicts are aggrieved people in case of former chief of colony №6 Denis Mekhanov who is accused in abuse of power. Before prisoners complained that Mekhanov using his connections tries to take them on rebound. 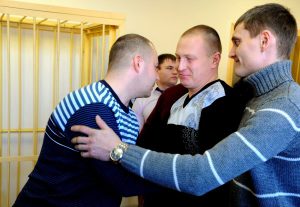