In Ivdel town court chaired justice of the peace began court session on criminal case of convict B. who according to primary investigation attacked convict M. and hit him three times in a face. At first sight it’s common criminal case based on interpersonal conflicts among prisoners in colonies.  There are tons of cases like that. Except one thing!

It’s about colony №63 in Ivdel which we consider torture chamber. Everything is under control of «convicts-activists «are made up of discipline and order sections. They set rules cruelly with help of fists and sticks sometimes sexual harassment in order to break person, to suppress will and make ZOMBIE out of inmates. «Activists» have own keys; they might walk prisoner out and made him do different humiliating things. Generally they are endued with commanding and executive functions and they fulfill what the administration indicates to them and, as a rule, commit unlawful acts against other convicts.

By order of Federal Service for Execution of punishment director these sections were abolished in 2009 but most of chiefs still use convicts to influence others.

Thus according to convict B. in the beginning of July 2013 in ward-type room he cut veins protecting against beating from convicts M. and H. They refused to walk inmates out. «Activists» have a «right» to deprive opportunity to walk outside.

When convict B. demanded a doctor and prosecutor M. and H. brought him to office of Ezhov.

What happened in there nobody knew but after accompanied by convicts M. and H. who humiliated him and provoked to do wrong actions. Convict B. couldn’t handle it punch one «activist» in a face. Upon this fact officers decided to deal with B. to the fullest extent of the law because he hit «activist»- «saint head». But some difficulties occurred how to hide fact of enduing with commanding functions some convicts. That was the main problem for penal colony №63.  Obviously they carelessly arranged everything: who stood near his cell, who brought him to office, made fake paper about position of janitor for «activist» and sent all materials to police where criminal case was opened up.

How they investigate this case we will leave behind the scene.

The most interesting is happening in court so far.

Nobody expected us. Meanwhile we’ve been waiting for invitation to courtroom, bailiff prohibited us talking on the phone promising us to write out administrative protocol if we don’t follow his instructions. Thus courtroom secretary tried to impact wisdom to us saying not to impose new rules there; they have their own.

Upon this fact we’ll file a claim. 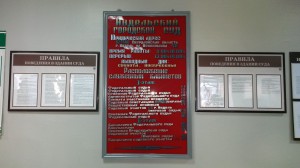 Prison officers apparently witnesses of criminal case after saw us they began whispering. It was clear; they were worried.

In courtroom on the bar there were convict B. next to him convict-victim M. under convoy.

Judge didn’t allow to take pictures and video because prosecutor and victim objected to it.

Having of witness who are prison officers and policeman.

The first one was chief of operative part Ezhov who yelled at convict B. being impolite. After comment from attorney Roman Kachnov, Ezhov apologized and started kinder a little. His evidence was short: he saw how bad convict B. attacked good convict M., hit him three times. Ezhov hearing words of convict B. that was walked out of office with junior inspector suddenly knocked on stand for witnesses and his ears went red.

Junior inspector don’t remember a lot but remembered how convict B. attacked him at distance 1 meter from him.

Another inspector simply stood and kept silence, answers «pulled out of » him by participants of court hearing.

Squad chief told there was nobody when convict M. was being attacked. Inmates were in cells; that information run contrary to evidence of Ezhov and junior inspectors and all materials.

Questioned chief deputy in operative work and security Ostrovskoy said that keys are belonged to junior inspector and it’s not allowed to give them to anyone. He also added that convict M. has a position of janitor exactly on day of fight.

Interesting question where was video registration for facility by what administration is supposed to watch prisoners and react quickly.

As for employment of convict M. , every witness stated that he was «hired» on a day of attack.  They say it like a poem learnt by heart.

Besides in the course of interrogation it was found that camera didn’t «catch» moment of attack.

There are so many mismatches.

It’s easy to see that officers are lying because they didn’t present when it happened.

We are interested in this case due  to fact of special squads existence who are used as special forces for making their rules in colony.