In summer 2013 we found that World War II veteran doesn’t receive monetary assistance set by the Russian Federation. Due to this fact veteran Anastasiya Vasilyevna Lapshina is begging money.

In September 2013 we addressed to Prosecutor of Lazarevskoye in Krasnodar region and explained the situation. Prosecutor with speaking last name -Sizo (what means in Russian -pre trial detention center) assured us that we would figure it out in particular facts of violations in pension. He promised to give us an answer. 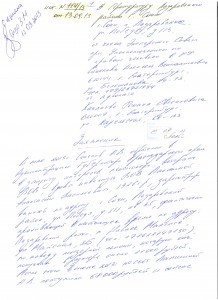 We have been waiting till November 2013 but no response. So we addressed to Prosecutor office in Krasnodar region asking why there was not response upon our request about thefts of money from veteran and still nobody brought to responsibility.

New 2014 has come and now it’s already the end of January, but Prosecutors still keep silence. We are wondering why World War II veteran’s pension is being stolen from her and this violation is still unpunished. Prosecutor office is off-duty. What if Prosecutors go in halves with someone who steals pension because they will die sooner or later and nobody will find out?

We addressed to General prosecutor office of Russia upon fact of theft and inactive prosecutors. We will see if there are honest people.