MENUMENU
Главная News Who «covers» Oswiecim in penal colony№63? How to win over corruption in...
Поделиться
Твитнуть

I actually saw it and described on January 28th 2013 fresh traces (17 hours) of terrible tortures on the body of Varlam Dzhemalovich Maglakelidze in penal colony № 63 in Ivdel.

Despite of threatens immediately I filed a claim about bringing to responsibility guilty ones, proving medical treatment and security for dying from beatings Maglakelidze from 28.01.13 about beatings to Investigation Committee in Ivdel, prosecutor and the Head of Federal Service for Execution of punishment.

Well what about result?

1. Photos of bodily harm taken after 3 hours after being filed personally by Investigator Gadzhiyev guided by the Head of investigation in Ivdel Vilchek disappeared without traces from case record.

2. With unreasonable delay 8 days(!) investigator Popova switched Gadzhieyv instead of providing all case records and my document of bodily harm on 5 pages and photos and claim from Gadzhiyev to medical examiner she gave fake document about 4 grazes from 29.01.2013 and medical card with false sign of doctor as if he applied green antiseptic (!) while in fact Maglakelidze kept being beaten (27.01.2013 at 5 pm). In fact doctor didn’t treat any wounds, I’m a witness here.

3. All questioned officers from penal colony № 63 seemed copied text of explanation as if he fell down and we saved him from «himself»; we applied legally physical force.

4. By order of investigator Popova these materials didn’t send to Ministry of Internal Affairs in Ivdel and there is written response.

5. Terrible pain in head, heart and liver of Maglakelidze appeared after tortures. Eyesight dropped to -8 and this is almost blindness. No required medical treatment and examinations despite of many claims to Prosecutor, Federal Service for Execution of punishment, penal colonies № 63, 55 and Investigation Committee in Ivdel. 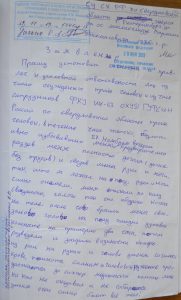 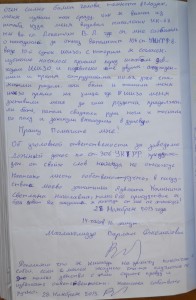 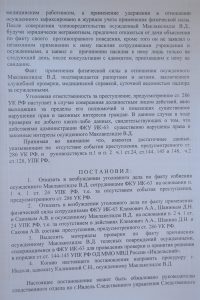 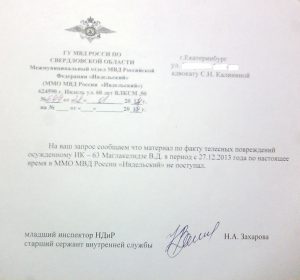 Anyone who has successful experience and smart ideas how to break situation quickly or call people who are accessory to tortures — answer! 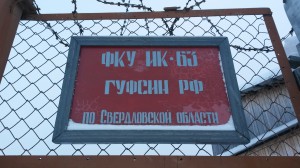 Who «covers» Oswiecim in penal colony№63? How to win over corruption in Ivdel?