On February 25th, 2014 a group of human rights activist consisting of Vasily Rybakov, Aleksandr Anikin, Svetlana Malyugina and me made a desicion to check operation of the law «On access to information about state and local bodies operation» № 8-FZ from 09.02.2009 and Governmental Regulation of Sverdlovsk region from 22.04.2010 № 662- PP «On Rules of Sverdlovsk region». 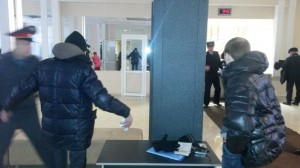 There is the Chief of  handling public appeals Department Igor Nikolayevich Zacepin.

This officer said with monotonous voice regulation which didn’t become a law yet and invited us to watch at Ministers on TV.

He turned a deaf ear to our arguments about illegality of his actions . We had to went down to the first floor and asked in security point. There officers refused signing out passes because we didn’t send a notification.

We addressed to security guard who was supposed to have our notifications and he found them but immediately hided. 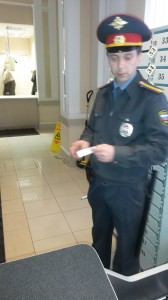 The Chief of Security came down and a lawyer of Directorate but none of them could explain on what ground they were refusing? Our reference to answer of Prosecutor office didn’t work. 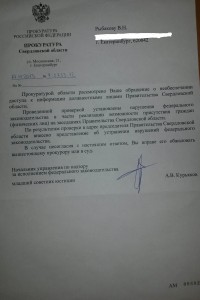 We had to go to Prosecutor officer back and file a new claim.

We will be preparing documents to court and for this purpose we taped a video. 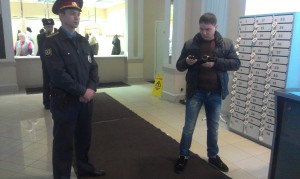