On March 18-19, 2014 members of Public Monitoring Committee Larisa Zakharova and Svetlana Malyugina as well as Expert Council member under Ombudsman Aleksey Sokolov made their way to Ivdel colonies.

The first one was penal colony №62 where beaten with plastic bottles convict Galeyev, we’ve written about it. Besides one of the convicts told us that in correctional medical facility №58 there is aged convict and who was beaten brutally.

The next day we’ve gone to the furthest Ivdel colony — correctional medical facility №58 which is located 3 km far from station Langur. 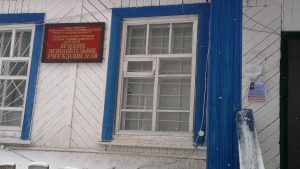 It’s possible to get there by train from Yekaterinburg; by car it’s very difficult if there is muddy season (rasputitza in Russian). From Ivdel you can get there only by car if you want to do it during one day because there is no place to sleep over. 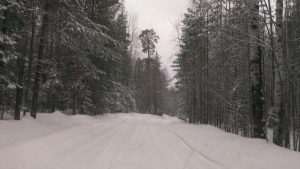 One month has passed since our last visit and our rule is to check correctional facility once per month.

There is a rumor about this place as a torture chamber and methods of discipline are no better than in colony №63.

We remind that when we’ve been in facility №58 for the first time we’ve found convict Dadayev who addressed complaints of beatings by «convicts-activists».

This time upon checks of solitary this convict addressed complaints once again-he is not taken for a walk about 20 days and staff don’t let him read.

Also we are informed that after we found inhuman living conditions there several of convicts were transferred from colony.

One of them was found in correctional medical facility №58, prison staff hided him from us saying that there was such a convict in here. Convict Georgy Shalvovich Soseliya, 1961 year of birth asked us for help and addressed complaints of unlawful actions from prison officers as well as «convicts-activists» who beat him. 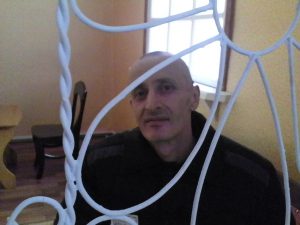 They beat him with plastic bottles filled with water in head in order not to leave traces. But there are traces left on fingers because he covered his head with hands. 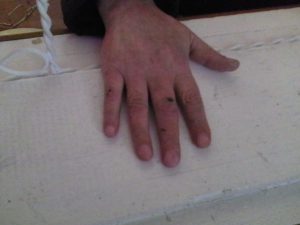 Here is the most all-time favorite method of IvdelLAG and more than 10 convicts are telling about it.

As convict Soseliya explained since March 15 he has experienced brute force from prison officers and «activists», also threatens to apply sexual battery. Soseliya was subject to cruel humiliating actions.  They grabbed his walking stick, orthopedic belt, banned bed rest which was put before. This convict has variety of diseases, post traumatic consequences. In 2011 he went through potential stroke condition, paralyzed right side of body. And now he is beaten in a head.

Since March 17, 2014 convict Soseliya refused to take food and wrote a statement about it. 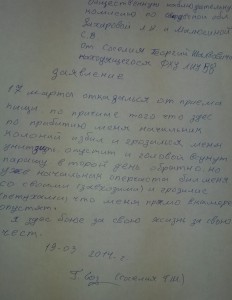 We talked to others. One told that feel bad from antituberculous medicine, another one — they divested him disability category. 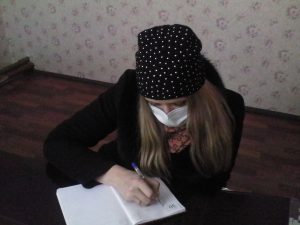 We walked through squads. We didn’t see a lot of convicts, conditions are not bad. All the more there is something to compare to- correctional medical facility №23. No complaints.

We were in a hurry to catch a train. We were to get over return trip across impassable roads.

Thank a person who answered a request to help to get «God forsaken place». We were on time. Apparently it’s our mission to help people out.