Ombudsman in Sverdlovsk region Tatyana Merzlyakova right after receiving Statement from members of Public Monitoring Committee of Sverdlovsk region about results in public inspection in medical correctional facility №23 in Sosva has offered human rights defenders and members of Public Monitoring Committee to get together and discuss the problems of this facility with the chief of medical department I.Komarnitsky.

There is information about non appropriate condition of buildings on the colony territory, numerous complaints of non-compliance with medication, treatment.

Today on March 24th,2014 this meeting was held in the office of Tatyana Georgievna Merzlyakova. There were the chief deputy of medical department №66 Oleg Tikhonov, the chief assistant of Federal Service for Execution of punishment Georgy Gubankov, Expert Council member under Ombudsman in the Russian Federation Aleksey Sokolov, attorney Roman Kachanov and members of Public Monitoring Committee Lyudmila Vins and Svetlana Maluygina. 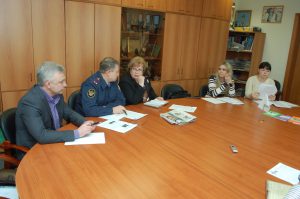 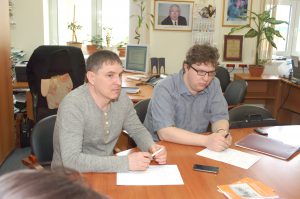 In the standard operating mode participants studied the most important issues on medical assistance, medical examinations, routine and psychological works.

Members of Public Monitoring Committee have expressed their concern over the fact that convicts are being detained in solitary after they talk to defenders with groundless basis.

Within meeting we shared complaints from relatives of returns of parcels with medical supplies. The reason isn’t clear. Although administration approved it earlier.

Oleg Vyacheslavovich Tikhonov put down this problem in his notebook and assured audience that there is no problem with antituberculosis supplies in facility and extra medicine can be prescribed only by doctor.

We’ve discussed issues over appliance of Government Resolution №54 on disease of convict which obstructs being in custody, terms over court decision.

Oleg Vyacheslavovich read out death statistics in there. For 2012 year 21 prisoners died in facility, in 2013 16 died.

Participants exchanged contacts and showed interest in some more meetings in order to study problems in penitentiary system.