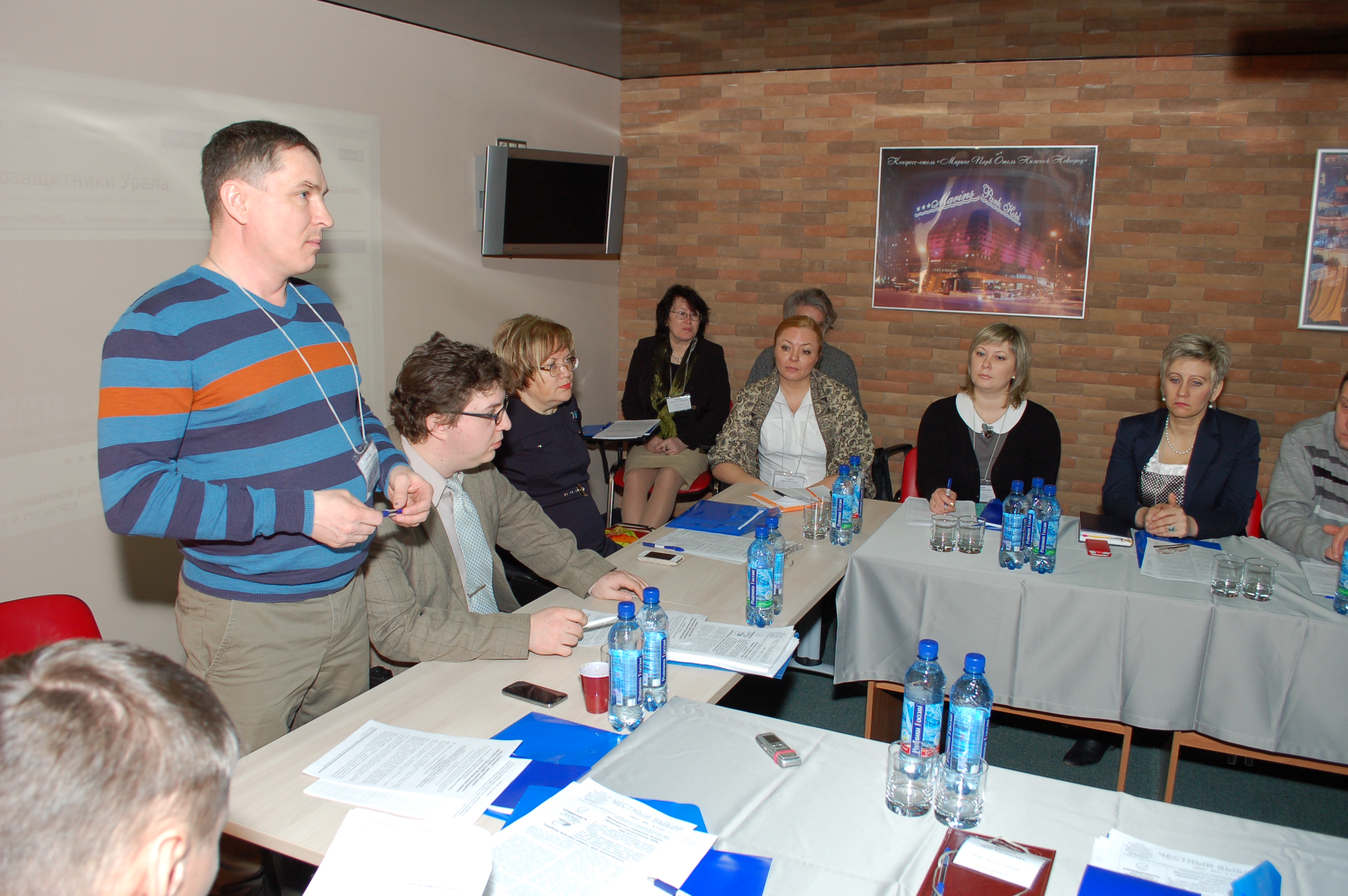 On Friday a panel discussion on a topic «COORDINATION OF EFFORTS OF HUMAN RIGHTS SOCIETY FROM THE URAL FEDERAL DISTRICT IN THE FIELD OF CONVICTS’ RIGHTS DEFENSE». 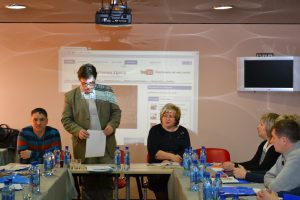 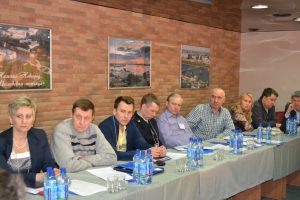 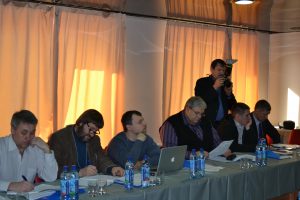 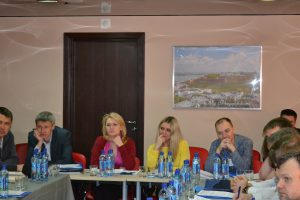 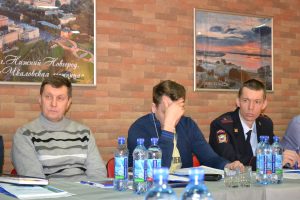 Director of «Legal Basis» and head manager of a project «Public service of penitentiary control in the Ural Federal district» Aleksey Sokolov delivered opening speech first. He told about work  which they plan to do (and which is in the process) in the project and results they plan to have in the end. Thus, in Sverdlovsk region mobile human rights groups had been established already consisted of members of Public Monitoring Committee, attorneys, human rights defenders and other experts in field of convicts’ rights defense. Development of such groups proceed in other regions of the Ural Federal district. 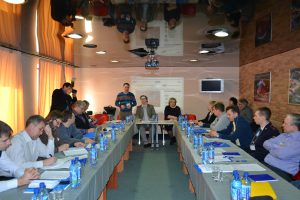 Then with welcome words spoke the Ombudsman of Sverdlovsk region Tatyana Gorgievna Merzlyakova. She told participants about long-term work that Sverdlovsk Ombudsman and her staff in field of convicts’ rights protection. In particular, Tatyana Georgievna noticed that process of arrests stays the same since decision making was passed from prosecutors to judges. There are fatal cases among arrested. Generally, according to Tatyana, die only those who are under Federal service for drugs control and those who are «under supervision» of Investigation committee never die.

Also the Ombudsman pointed out that when prison medicine stopped being in control of Federal Service for Execution of punishment, the situation didn’t change at all. So she hoped that one day it is going to happen. Then Tatyana brought up issues of convicts’ salary, parcels, passports, deportation from correctional facilities. Specially Tatyana Georgievna drew attention to necessity of increase of professionalism of Public Monitoring Committee members.

In answer to a question from Roman Kachanov about her attitude towards establishment of Ombudsmen at a regional level for certain group of people, in particular for prisoners, Tatyana Georgievna showed disapproval and said that it might devalue Institute of Ombudsman at all.

After Tatyana Georgievna, delivered his speech the Chairman of «Trans regional center of human rights» Roman Kachanov who told participants about general condition with observance of rights in Sverdlovsk region, also about National preventive mechanism set by Optional protocol to Convention against tortures which hasn’t been ratified by the Russian Federation yet.

He said that work of public monitoring committees may be seen as prototype of future National preventive mechanism in our country. The representative of Public Monitoring Committee D.I.Rozhin told everybody about recently issued Report with results of inspections by members of all police departments in Yekaterinburg.

Representative from Ministry of Internal listened attentively speech of Rozhin, made some notes and asked where he could get this Report. 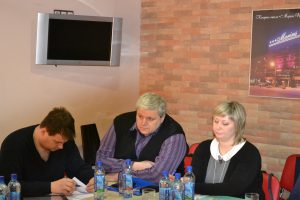 The Ombudsman assistant of Chelyabinsk region Maksim Babin told them that lately number of requests from convicts from correctional facilities has dropped off. But number of suicides has increased (23 cases). Maksim Babin shared his idea that convicts can get prescriptions in their hands like it is in civil medical facilities in order prisoners understand what kind of medicine doctors write out them and how they can get them. This idea got a strong support from participants of panel discussion. 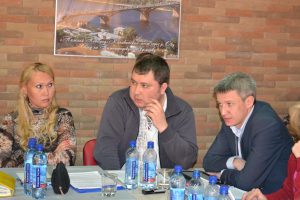 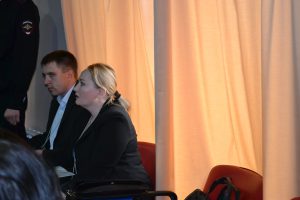 Member from Chelyabinsk Committee Oksana Trufanova said that decrease of convicts’ requests doesn’t mean that there are no problems anymore. Larisa Zakharova — member of Council of coordinators «Trans regional human rights center» was next who told about her personal experience as a human rights defender, representative of prisoners and  member of Public Monitoring Committee, about «pros and cons» of each form of convicts’ protection.

Speech of the President of Public organization «Ural association of refugees» Lyudmila Semenovna Lukasheva was striking. She made presentation on a topic «What is Russian Citizenship?». Her topic was connected with problem of most prisoners who don’t have passports defining their legal status. Many participants asked for this presentation. 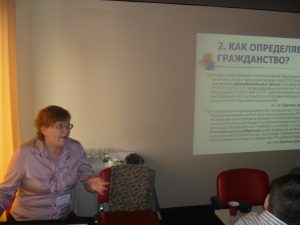 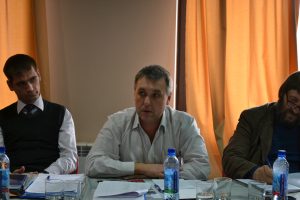 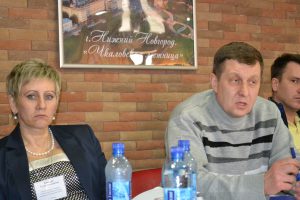 Attorney from Kurgan region Elena Artukhova noticed that in there Public Monitoring Committee almost doesn’t exist. She took her interest in public control after this panel discussion and she will do her best in order Public Committees start working in Kurgan. Generally participants of panel discussion showed their approval of event, mentioned its high level of organization.

Thus, goal of panel discussion  to establish contacts among human rights defenders of the Ural Federal district and formation of mobile groups was reached. 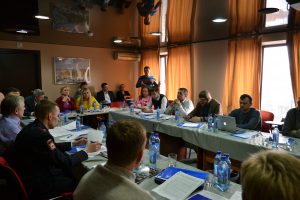 Within discussion participants were provided with informational materials. 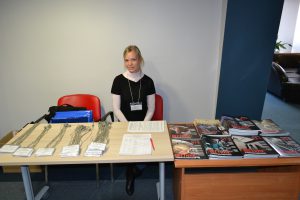 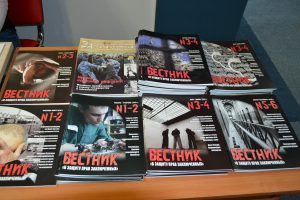 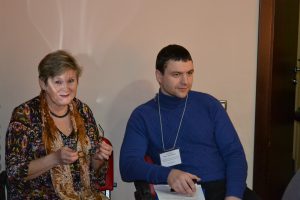 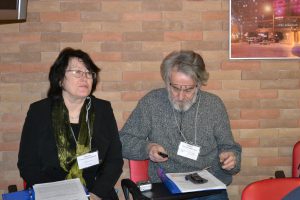 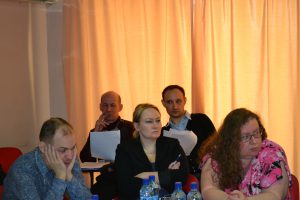 Panel discussion was held as a part of project «Public service for penitentiary control in the Ural Federal district». While executing the project means of state assistance are used allocated as grant according to Order of President of the Russian Federation on 18.09.2013 № 348-рп”) and based on competition of Donor”