MENUMENU
Главная News The facts are obvious. Beating of prisoner and denial of access for...
Поделиться
Твитнуть 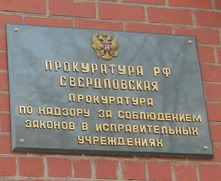 Let us recall: on March 17th 2014 members of Public Monitoring Committee of the Sverdlovsk Region: Vasily Rybakov and Svetlana Malyugina were not admitted to penal colony № 2 in order to meet with convict D. Deputy warden Edunov justified his actions by condition of convict (he has tuberculosis).

After that members S. Malyugina and V. Rybakov have claims against Edunov to different state facilities including courts.

The date for court session is set for April 24 at 14:00; Verkh-Isetsky regional court of Yekaterinburg.

Klementiev confirming a fact of denial of access for members of Committee, in other words, proves a fact of actions against public control and legalizes actions of prison administration. Besides Klementiev refers it to some «old» regulations and standards, establishing «secure regime» in facilities.

Judging by this response, we see that convict D. have got bodily harm by another convict — apparently «activist» of penal colony № 2. Bodily harm was inflicted on March 18th, 2014.

Stated another way, convict D. was beaten the next day after members of Public Monitoring Committee came to visit him! Obviously, it was done in order to demonstrate other prisoners that they should not have asked human rights defenders for help.

Exactly this way Law is being observed in the Sverdlovsk Region! As for Prosecutor office in the name of Klementiev, apparently they see their duty in hiding «criminals in uniform» and covering their unlawful actions.