Today on May 28th 2014 judicial panel for civil cases in the Sverdlovsk region rejected petition for appeal of regional prosecutor Sergey Okhlopkov. Sergey wanted to challenge decision of Verkh-Isetsky regional court where it was stated that prosecutor had made an unlawful warning to the Director of non-commercial partnership «Assistance in legal help «LEGAL BASIS» Aleksey Sokolov.

Let us recall, within inspections of Russians NGOs, on April 18th 2013 prosecutor of the Sverdlovsk Region and justice counselor of state Sergey Okhlopkov issued a warning to the Director of non-commercial partnership «LEGAL BASIS» Aleksey Sokolov about inadmissibility of violation of «foreign agents» law. Aleksey received this document on November 19th 2013 and considered it to be illegal and groundless. So he made up his mind to challenge it.

Aleksey Sokolov didn’t deny that «LEGAL BASIS» receives sponsorship from abroad, however he strongly rejected a fact of participation in political activity. NGO paid attention of court to the fact that warning says: «Any massive events (meetings, demonstrations, pickets, marches) were not organized and NGO didn’t participate in there… In fact all the money is spent on trips to the colonies and legal consultations for convicts and their relatives.»

-There is no mention that members of «LEGAL BASIS» participates in politics on the territory of the Russian Federation in our charter documents. Also there is no such a thing in prosecutor’s warning,- writes Aleksey Sokolov in statement for the court.

On March 7th 2014 Verkh-Isetsky regional court of Yekaterinburg completely satisfied this statement of NGO, declaring prosecutor’s warning to be illegal. 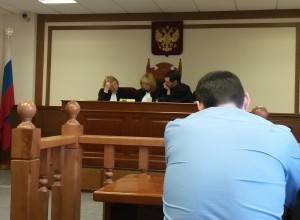 In the Sverdlovsk regional court representative from Prosecutor office, while explaining its appeal, referred to information from Federal Security Service in the Sverdlovsk region which mentioned about  potential destructive activity of «LEGAL BASIS» that resulted in massive riots in correctional facilities located on the territory of the Chelyabinsk Region.

At the end of his speech prosecutor added that mentioned information wasn’t taken to court of the first instance because it amounts to Secrets of State and now he cannot disclose it either because he will be prosecuted.

Why does he refer to «evidence» which is in reality only supposition?