On June 5th 2014 another court hearing took place in Sverdlovsk regional courthouse of Belgorod upon denial of access for representative of fund «For convicts’ rights protection» Larisa Zakharova. She meant to give legal consultation to several prisoners in penal colony № 5.

In the course of court hearings Expert of Fund «For convicts’ rights protection» Larisa Zakharova who is also acts as representative of convicts according to power of attorneys, persuasively was insisting on her right in having meeting with convicts in order to provide them with legal help.

For two hours parties were fighting.

Convict A. transferred from penal colony № 5 of Belgorod to penal colony № 33 of Republic of Khakassia, participated in court hearings with help of video conference calling. Let us recall that convict A. had asked Fund for legal help, because he was under apprehension of his life and jailers of penal colony № 5 were applying physical and psychological pressure in 2013-2014. He was kept in solitary where he slept on shield without water and light.

Apparently in order to hide crimes of jailers, they don’t allow Larisa Zakharova to visit convict A. 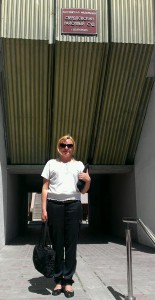 She wasn’t admitted to another prisoner who was also in cell without ventilation. Convict G. suffers from heart disease after infarction. In the court representatives of penal colony № 5 and Federal Service for Execution of punishment in Belgorod region insisted on Federal Law № 76 «On public control for human rights in correctional facilities and on assistance to convicts», also «On legal help free of charge in the Russian Federation»; they referred to the fact that only people with Graduate Diploma in Law are allowed to provide convicts with legal consultations and with approval of colony administration in advance.  Larisa Zakharova on purpose didn’t bring her Diploma. She defended her lawful rights according to Constitution and Correctional Code.

As a result judge V.N. Sorokoletov has satisfied petition for actions of colony chief to be declared unlawful, as for Federal Service for Execution of punishment in Belgorod region, judge rendered interlocutory order over low education of jailers.

Besides, judge added that we cannot judge if legal assistance is provided knowledgeably or not by absence or presence of Diploma. The most important how convict feels about his defender.

One more time we have proved jailers wrong; Diploma is not necessary in order to meet with convicts.

We demand law-abidingness and fight against lawfulness.