Today on June 17th  2014, Verkh-Isetsky regional courthouse in Yekaterinburg satisfied petition of experts of Fund «For convicts’ rights protection» Aleksey Sokolov and Larisa Zakahrova over failure to get meeting with convicts in March 2014 in penal colony № 63.

Let us recall that this colony has reputation of torture chamber among human rights defenders, prisoners and their relatives. Former «convicts-activists» told in Ivdel courthouse about sick torture system in there.

«Informed — empowered» — this way think human rights defenders. They have decided to tell prisoners about their rights in order they can protect themselves in courts and fight against law breakers and jailers. But it was not to be!

Colony administration has stepped on the way where human defenders and lawyers are not welcomed to help convicts. Jailers think that it’s easier to torture illiterate convicts. Colony administration everytime makes up new tricks to justify «lawfulness» of their unlawful actions. Thus in January 2014 administration refused to provide Aleksey Sokolov with opportunity to meet with convicts; kept him waiting outside and didn’t give explanations. Later on administration said that officers couldn’t write explanation because Sokolov had grabbed his statement and run away. Prosecutor office of Sverdlovsk region where Aleksey challenged actions didn’t agree on these grounds.

In March 2014 Aleksey Sokolov came back there. He was waiting for a day in outer office while chief of colony was studying his statement.  At the end officers said that there was chief in there and they didn’t know when he came back. Then to his huge surprise he saw representative of the same fund Igor Golendukhin in outer office in order to register his statement about meeting which had already taken place before. This representative was seen by other members of Public Monitoring Committee in Sverdlovsk region.

It is not the first case studied by judge N.A.Netsvetayeva over petition from experts of Fund «For convicts’ rights protection». The first one human rights defenders failed to win because they had made some mistakes completion of papers; they should have to put as name of defendant administration of oclony but not chief colony Valery Lopatkin, because all officers take responsibilities for actions in colony. Aleksey Sokolov and Roman Kachanov challenged this decision in Sverdlovsk regional courthouse. 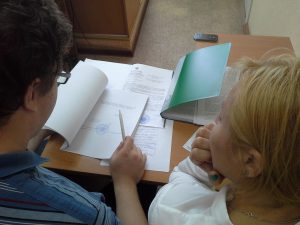 In today’s court hearing there were three representatives of Fund «For convicts’ rights protection» — attorney Roman Kachanov, human rights defenders Larisa Zakharova and Aleksey Sokolov. Finally there happened what was meant to be — colony administration «fell down» under legal arguments. Judge N.A. Netsvetayeva has satisfied petition of human rights defenders in three charges:  denial of access and no explanation mark in papers for Aleksey Sokolov and Larisa Zakharova.

As soon as we receive court decision we will post it in our site.