On June 20-21, 2014 members of Public Monitoring Committee of Sverdlovsk region -O.I. Dianova and L.V. Zakharova received the statements which say about physical and sexual abuse  from convicts upon inspection of penal colony № 63.

After having written these statements, convicts have a dread of their lives, that’s why Larisa Zakharova and Olga Dianova have filed a claim to police department of Ivdel, call center of Federal Service for Execution of punishment and Investigation Committee in Sverdlovsk region demanding to conduct inspection about mentioned facts and put convicts into safe place. 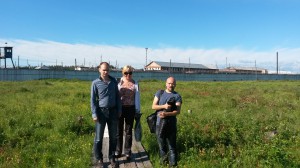 In the course of inspection Ombudsman’s assistant in Sverdlovsk region — S.N. Sannikov, deputy of Prosecutor -A.A. Klemenko were present together with members of Public Monitoring Committee.

Members of Public Monitoring Committee and mentioned authorities have visited premises of squads of high security and quarantine department.

It turned out that convicts, who asked for help earlier, were not transferred to safer place, quite opposite, they faced several prisoners who were put into their cells in order to place pressure on convicts (who had made statements). Those prisoners force to refuse the statements and threat with physical and sexual abuse which might be applied towards them.

Convict N. and K. have confirmed evidence given earlier by them, convicts K. and Mikhail Tregubov told about unlawful actions of prisoners who perform functions of administration.

Convict Leonov have confirmed his statement given to members and added more facts about completed offences towards them. 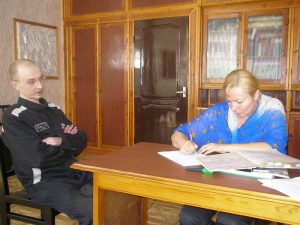 Thus, for instance according to Leonov on May 10th another convict N. arrived at colony who was subject to tortures. The purpose was to «break» him and his will.

The same day after lockdown, convict N. was beaten by «convicts-activists»; they kicked in chest, kidneys, spleen, poured him with cold water. He couldn’t handle tortures and humiliation and on May 16th he tried to commit suicide in the bathroom. 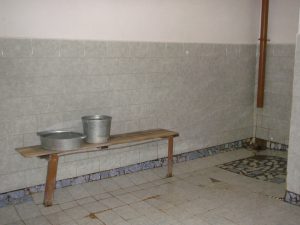 -ribs of convict I. were broken;

-convict B. attempt of suicide after threatens of sexual abuse;

-chest of convict T. was broken;

— convict B. — wounds from metal tool in the region of heart in quarantine department № 1; camera was on.

Besides, Leonov told us that all functions of administration in penal colony № 63 are carried by special people — «convicts-activists».

The function of deputy of warden of squad № 1 in 2012-2013 was performed by convict Sh and at the moment it’s convict Igor A. All documentation is under control of «convicts-activists» also; they open up and close cells without keys using regular scissors.

In each squad of penal colony № 63 «convicts-activists» trace of movements of convicts as well as of members of Public Monitoring Committee. «Activists» know in advance so they tell all convicts not to complain, otherwise they will be subjects to tortures and sexual abuse. Also convict K. said jailers applied tortures and generally illegal actions — in solitary he was beaten, poured with cold water, threats of sexual abuse).

The next one was convict A. who experienced in 2013 sexual abuse — he was brought outside where 7 prisoners expected him, then convict G. sexual actions towards A. All convicts are scared, that’s why also they gave permission to post their statements and told about tortures on video. These videos will be posted later. 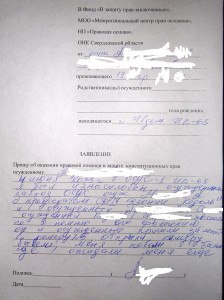 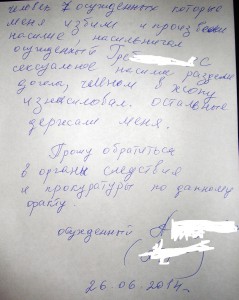 We found out that jailers take extra fee for additional meetings with convicts from relatives. 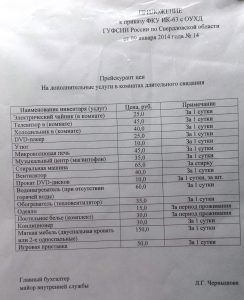 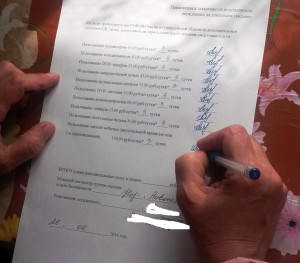 Upon these facts petitions have been filed to Investigation Committee of Russia, General Prosecutor office, Ombudsman in Sverdlovsk region.

Members of Public Monitoring Committee are afraid that local investigators will soften an issue in penal colony № 63.

We will be monitoring the developments of situation.