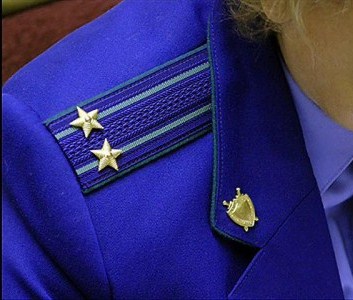 At weekends members of Public Monitoring Committee of Sverdlovsk region checked detainment conditions in the penal colony №5 of Nizhny Tagil. During inspection they discovered convict who had participated in protest movement against illegal actions of jailers previously.

Let us recall group of  convicts in solitaries injured themselves in belly area and veins. The reason was unlawful use of physical force by jailers. After this protest colony administration tried to hide this fact and transferred some convicts to different facilities and all the rest were forced to keep their mouths shut.

Sverdlovsk regional prosecutor office doesn’t see group act of convicts and states that there is no group self-harm.

Work of prosecutor officers raise some questions.. because while conducting inspections upon complaints of prisoners they as a rule just give run-around reply. They check a colony, question some convicts, officers and don’t fine law breaches. Prosecutor officers don’t care of injuries and self-harm of convicts. Officersturndeafearstothem.

Whose interest do officers protect?

Investigator of Tagilstroevsky disctrct -A.O. Usatov tops anyone else. While carrying out inspection about unlawful actions of jailers in the penal colony № 5 towards convict C., had questioned Chief of Security Department — Andrey Promyshlennikov. Andrey said that he had seen the convict in extreme emotional disturbance and enchained him with the handcuffs to the grille in the solitary for 4 days!!!!!!! We would like to look at Andrey in extreme emotional disturbance around the grille for some days like an animal! Although even towards animals such sadistic methods are not applied…..

In the article 28-30 of Russian Law «On bodies and facilities, executing punishment for criminal offence» there is no even a word of enchainment prisoners to the grille for their good.

The fact of tortures didn’t get attention of Investigation, quite opposite he justifies torture system and hands down the decision to reject initiation of criminal case. Just like that tortures are part of the Law in Russia.

Why do we need such officers of law bodies who act against LAW?