MENUMENU
Главная News Two women — members of ONK against the General of the Prison...
Поделиться
Твитнуть

Let’s remind you that on August 6th women launched a hunger strike against tortures and violence towards prisoners in the penal colony № 63 in Ivdel of Sverdlovsk region. They brought chairs, bottles with water and settled in front of the Prison Chief Directorate with poster about strike. We handed over demands to the Federal Service for Execution of punishment.

The fourth day begins as usual with morning hygiene and reading.

In the middle of the day Olga Dianova and Larisa Zakharova talked to journalist Denis Porubov from Radio Svoboda. They told about the reasons of hunger strike, how convicts are being tortured and killed in the colony. Also they added that all inspections end up the same way:  no convicts confirm their confession given previously because they are scared. Death rate is higher and higher. The last convict members talked to was beaten after their visit. The next visit of members they saw his name in the list of died inmates of pneumonia.

Thus, Olga Dianova and Larisa Zakharova think that in order to find out the truth investigators have to transfer those convicts into safe place and question them. While convicts are in the colony they will be keeping silence. So one of the demands of the protesters is to provide them with security and transfer them into pretrial detention center. General Khudorozhkov doesn’t agree with it. Maybe he has something to hide from people.

During the day protesters are being visited by friends, colleagues. Passers-by are asking questions and offering help. We have a lot of kind people.

Today Larisa Zakharova got a call from police department; they asked how women feel and offered to bring water. 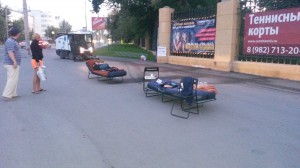 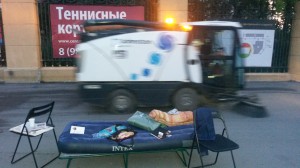 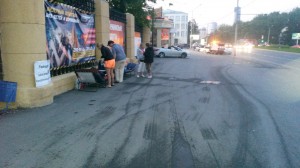