On August 27th,2014 experts of Fund «For convicts’ rights protection» Aleksei Sokolov and Svetlana Malyugina visited correctional facilities in Tavda where they carried out legal consultations.

The first colony was the penal colony № 19. Deputy of warden -Sergei Zavadsky have met experts in the office, he without any problems signed the admission passes for meeting with convicts. All the meetings were in confidential way.

Interesting fact that at the entrance of warden’s office there is a sign about video surveillance. Maybe warden points out his actions are corruption free. If it is true, it is commendable… We’ve never seen such signs in the penal colonies. 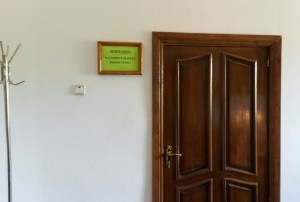 Human rights defenders didn’t have to wait a lot there before colony administration had studied their applications for meetings with convicts under art. 89 of the Penal Code. The representatives of facility have made copies of organization’s Charter, signed out passes and walked them through check point.

Human rights defenders were surprised with landscape design of the colony. Relatives of convicts said only good words about this colony. It feels administration takes care of inmates.

We’ve had a meeting with two convicts confidentially. They have been consulted about their rights to challenge responses from the Prosecutor office and the Federal Service for Execution of punishment where he had complained of beatings by «convicts-activists». To stop beatings he was forced to cut his veins and throat and when he felt unconscious, prisoners stop beatings. Human rights defenders have questioned him in details. It turned out some people from squad deal with money extortion; those who don’t agree, become subjects to physical abuse. Prisoners from the Section of Discipline and Order as a rule act on behalf of administration and take away money from them. Human defenders received a claim from this convict which they plan to hand over to law-enforcement bodies.

Human rights society is worried for violence of «activists» in the correctional facility who carry duties of warden. Heads of the Sverdlovsk Chief Prison Directorate are trying to hide the real picture of arbitrariness in facilities.