Members of Sverdlovsk Public Monitoring Committee have found a convict in terrible condition at one of the regional correctional facilities. In the simplest terms it was body covered with skin and nothing else.

Nowadays it causes fear and horror. Members of Committee has questioned this convict. During conversation he explained that he has serious diseases but prison doctors don’t pay attention to him. Food in the colony is horrible.

Members of Committee have been given photos of this convict and materials about what’s happening in there. Earlier these photos hadn’t been posted for ethical reasons but pictures and documents were sent to Investigative bodies and Prosecutor office of Sverdlovsk region for further study.

In the beginning of August 2014 the representative of Ombudsman in the Russian Federation -Alexander Borodin visited him and promised to help.

Not long ago human rights defenders found out that convict died unexpectedly and relatives suspect that someone «assisted» him to die. 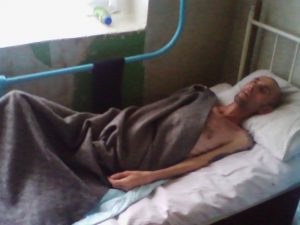 Dead bodies are lying right in the corridors. 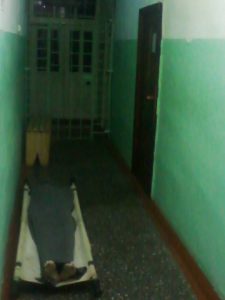 General S. Khudorozhkov is aware of all the issues in the colony. Members always inform him but his attitude towards problems is still not clear because there are no changes. In the case of dead convict once he pointed out his problems, he died there. It is written that he died of disease but what happened in fact — unclear.

General Khudorozhkov apparently doesn’t to be involved in prison troubles as he always tries to hide it.

In Sverdlovsk colonies convicts supervision is in the hands of special group of convicts; administration keeps standing aside. Due to it in April of 2012 in the penal colony № 55 there were mass riots and members of Committee made a report in details; one year later in May of 2013 the same thing happened in the penal colony № 46 of Nevyansk where General admitted the fact of existence of special groups who run the colonies.

How come criminals run other criminals in the State facilty? It’s not possible for state person because it affect the authority of Law.

Why does penitentiary system need  such General who doesn’t serve Law?