On September 6th, 2014 in the center of Yekaterinburg activists of Sverdlovsk region conducted a rally in support of political prisoners.

Rally went on quietly. Policemen didn’t obstruct a rally because this action was signed off with administration of city according to law.

There were 30-50 people. Everyone got a right to speak. Someone was reading out poems, someone was singing. In the course of a rally participants were gathering signs in support of political prisoners. Any willing to leave his sign could do it on the letters which after a rally were sent to colonies and prisons of Russia where political prisoners are serving their sentences. 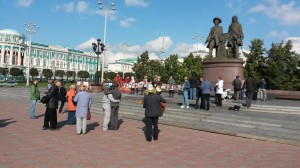 A lot of people came up to participants of actions, asked if they could help.

Of course there were provocative acts but everything ended up well and provocateurs were taken away by police.