In Belgorod regional courthouse they have participated in two court hearings. They both were about the same problem — denial of access for representatives of human rights organizations to correctional facilities.

The matter was that courts of the first instance handed down controversial decisions: Sverdlovsk regional court of Belgorod has satisfied application of Fund «For convicts’ rights protection» and convicts Arsenyan and Goksadzhe and declared actions of warden to be unlawful. But Valysky regional court of Belgorod region turned down claim against warden of the penal colony № 47.

This case was studied by judge Irina Viktorovna Naumova. The first one was case about the penal colony № 47. In the course of court process human rights defenders were shocked by incompetence of this judge who asked Larisa Zakharova if she had «certificate» to provide convicts with legal assistance. Larisa answered she didn’t have it because there is no such thing at all. But she has diploma in law however she didn’t show it because law doesn’t say to do it.

In general there is no list of documents in law which are supposed to be shown for legal help. Then the representatives of applicants had their words — Aleksei Sokolov and Roman Kachanov.

After hearings judge was thinking over for two minutes and handed down a decision to refuse to satisfy an appeal.

Later the same judge was studying the case about the penal colony № 5 and the court satisfied demands of human rights defenders and convicts. Larisa Zakharova and Roman Kachanov said their words but while Roman was speaking, the judge said about «3 minutes rule». Surprised attorney began his speech. After three minutes Naumova interrupted him saying that time is up.

Attorney couldn’t finish his sentence and judge was yelling about three minutes. Then attorney asked for the judge’s recusal. Two members of collegiate run to consulting room. They didn’t react at all on request of recusal. 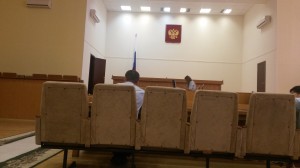 After they came back they announced that there would be no recusal.

The end is obvious — court decided to call off decision of Valuslky court and refused to satisfy demands. 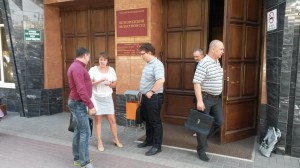 What can we say? There is really weird «justice». The Constitution is the same everywhere but laws don’t work. So there is only one way is to fix on federal level and human rights defenders know how to do it.