MENUMENU
Главная News Juvenile states that he was tortured for admission of offence in the...
Поделиться
Твитнуть

Father of juvenile inmate has applied to Human rights defenders of the Urals with complaints that his son was arrested and detained into the pretrial detention center-1 of Yekaterinburg. There he was subject to physical violence; it was all done in order to get admission of offence he hadn’t committed. To stop this torture, juvenile was forced to sign full confession.

At the moment his son is being in terrible condition and asking for help.

Attorney Vladimir Kapustin has visited this inmate in the pretrial detention center-1 to protect him.

A meeting happened when investigator was reading out charges for him. In front of attorney and his father convict refused his confessions having pointed out investigator had received it after tortures. 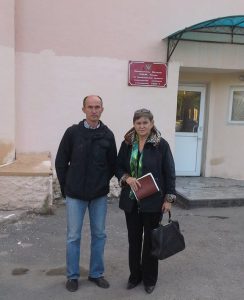 Today on September 11th, 2014 as a part of the project «Public service for penitentiary control in the Ural Federal District» members of Public Monitoring Committee — Olga Dianova and Sergei Kirillov inspected the pretrial detention center-1 of Yekaterinburg and that juvenile inmate.

Having  checked conditions of detainment of inmate Sh. (1997 year of birth), members talked to juvenile. He was telling them how he used to be beaten in the basement.

Later members checked living conditions in the fifth building with under-age offenders — everything is good.

Also, members checked the sixth building with grown inmates. In one of the cells for suspects there are 41 people and this cell is meant only for 10 inmates; beside cell is without window glass.

Human rights defenders of the Urals and members of Public Monitoring Committee are preparing a lot of applications for defense for this juvenile convict and will be controlling him. Vladimir Kapustin as a part of the Presidential grant will be dealing with his criminal case.

Human rights defenders of the  Urals