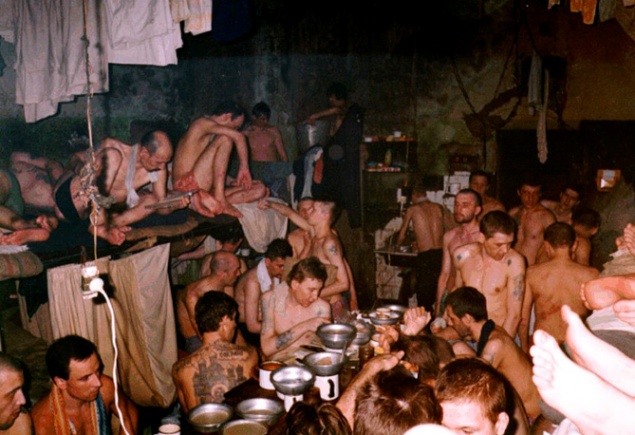 Human rights defenders and members of Public Monitoring Committee from Moscow, Moscow region and Yekaterinburg talk about crowded pretrial detention centers where prisoners fall down out of three storied beds even when officers of Federal Service for Execution for punishment are aware of a right not to accept more convicts if there is no space.

While the Public Chamber is getting ready for hearings about crowded prisons, locally jailers are making the third level for beds of prisoners and settling convicts into the colonies.

The pretrial detention centers of the Sverdlovsk region are overcrowded. In particular, as it follows from an official response of the Federal Service for Execution of punishment in the Sverdlovsk region № 68/TO/34-10 from 26.08.2014 in response to inquiry of member of Public Monitoring Committee -Vasily Rybakov there are 2818 convicts in the pretrial detention center-1 on 21.08.2014 when it’s supposed to be only 1791 places.

There is no room to sleep for convicts, that’s why people have shifts for sleeping!!! Officers of penitentiary system make helpless gestures and say that cannot do anything. However in fact if limit is reached, they have a right not to accept new convicts. But it never happened in Russia.

Despite of numerous decisions of European Court of Human Rights (for instance, case «Ananyev against Russia«), no effective measures were not taken.

Sure, in the pretrial detention center-1 there are demonstration cells where detainment conditions are close to European standards. At the same there are cells where conditions are awful: besides overcrowding -shabby walls, lack of fresh air, insects, only cold water, that’s why convicts have to warm up water with electric heater, they take shower once a week. Cells are various but the biggest are meant for 12-18 people.

On average a convict is spending  about 12 months while investigation, court and procedures are lasting. It happened that people were there for years. In general there are 6 pretrial detention centers (two of them are female facilities). As for female isolators there is no such a problem. As for the rest the problem exists, cells are old: especially isolators № 2 (Verbitsky) and № 4 (Kamyshlovsky). Buildings of pre-revolutionary times, horrible conditions.

PFRSI is regular separated premises with cells. But isolation is not everywhere: in some colonies «convicts-activists» are allowed to go inside of PFRSI and do whatever they want — beat convicts, wheel out testimony out of people by force. This is practiced in the penal colonies №2,13 (Nizhny Tagil).

In the penal colony № 5 members of Committee found one suspect who had been enchained with handcuffs to the grille; jailers could keep a person in this condition up to the week.

Thus, investigators try to get full confessions from suspects.

Total amount of the pretrial detention centers is 11 and PFRSI in Ikshe and female colony. Yesterday we met with Head of regional directorate of Federal Service and they don’t hide that in Moscow region there is huge overcrowding -240%. Moscow is rated the first one in this sad list, then Saint Petersburg, Yekaterinburg. Before we were among the four premier. When we asked how officers are going to reduce level of overcrowding, they said by means of other alternatives for example home detention.

Eduard Rudyk, executive secretary of Moscow Public Monitoring Committee, member of the board of Committee for civilian rights:

We talked to warden of the pretrial detention center: he said that he could take off the third level but in that case convicts would sleep on the floor, no space.

More often in isolators which were built in times of Ekaterina Empress there are high ceilings and it allows to build up new levels on the beds. But it happened that a person sleeps almost on the floor because his level is very low, happened that people have to sleep together or in turns. But to fix problem by means of third storey is also bad idea because people fall down.

Several months ago in Kashir person with disease of central nervous system fell down out of third level and broke spine. There are reasons to suppose that someone pushed him because convicts get on well in that cell. If to make the third level lower then person who is on the second one feels like he is in a grave.

In Empress of Ekaterina’ times Kashirsky, Kolomensky, Serpukhovsky isolators were built. Even they say that in Serpukhov and Kolomna buildings of XVI century since times of Ivan the Terrible.

As for Volokolamsk building was constructed in XVIII century as a house for horse stealers. Overcrowding resulted in decline of working conditions for officers of  the pretrial detention center, because it’s getting more convicts than officers. It concerns prison medicine: number of doctors who are meant to work with 150 prisoners, they work with 200. Also low salary…staff shortage. Thus quality of medical treatment get worse. Besides another problem is lack of medicines.

In our region situation with overcrowding is in critical condition. I remember 1990s where cells were overcrowded and convicts were sleeping in 3 turns; later situation became a bit better. And he we are again.

That could be explained by trial practice, policy of courts when measures of Criminal Procedure Code are not used at all, such as home detainment, deposit and suretyship.

Courts ignore this situation with prisons. It is not in compliance with international standards. An year ago I delivered a speech in the Public Chamber and offered this idea that if Prison Directorate violates international standards we have to use international way to resolve the problem. In particular, experience of Scandinavian countries where if there is no space for convict, he is put on the list. While he was waiting for his turn, he is at home under control: he cannot escape or leave a country. It looks like home detention.

Before my speech everyone laughed at me as it was a nice joke. Later on Head of Legal Directorate of Federal Service at the meeting of Presidential Council repeated my thought: maybe to put on the list.

It seems to me that in order to remind courts about international norms we might apply this experience.

Moreover, we are talking about suspects not about serious criminals. Turn might be good way to solve it. But even better variant is to use home detention, deposit and suretyship.  Here it has to be political will and influence of Supreme Court. I know that in Supreme Court people are concerned about this problem but no steps are taken.

Scandinavians have the best prison system in the world. In American prisons which I’ve visited there is overcrowding — they are less demanding to international standards than Europeans. Good situation in the English prisons- there are two people per one cell.

It’s also important that in European prisons are open cells for some convicts. 10-15 cells with local zone where people walk, talk, play pool and tennis. When convicts go to work, it’s also free movement across a prison.

In Russian penitentiary system it doesn’t exist. Here a person sits inside and even he goes to breathe outside, he happens to be in closed space and cannot move around. Besides, our so-called dorms — heritage of GULAG: they were built upon a brigade rule, which means in one room there were 50-60 people and it was convenient. Today it’s nonsense, because jailer cannot control situation, there is also danger of violence and violations.  Due to this an idea came up to rebuild prison system on the basis of European system but it was turned down. However, an idea to extend premises is essential. And we do it: I saw in Tambov, Kostroma, Krasnoyarsk rooms-dorms on 6-10 people. Anyway, it’s better.

Important difference is that in Russia actively they fight against cell phones. In Europe there is no such a problem because on the each floor there are telephones and prisoners can call any time they want. Sure these phones are under control. Here is a problem № 1: searches for cell phones, beatings etc. What if to make more phones  in Lefortovo — prison on 150 people? To conduct searches, beat with batons and take a bribery for phone is more interesting than to reform a system.

Photo from archive of Center for assistance in reform of justice.