On October 23 2014 as a part of the project «Public service for penitentiary control» expert of Fund «For convicts’ rights protection»- Svetlana Malyugina and attorney Roman Kachanov went to the penal colony № 63 of Ivdel to provide convicts with legal help and participation in a court hearing.

Svetlana Malyugina has consulted convict M.V. Trigubov who is now in a secure place and under control of members of Public Monitoring Committee and human rights defenders in the penal colony № 63.

During inspection convict Trigubov has complained that it’s very cold in his cell, he has not given warm clothes and he hasn’t taken for a walk since October 13.

He is being in this cell as if he is in solitary because he tore off pages out of the book which had been given to him at the prison library. According to him, he had got that book with already torn pages. He was transferred into solitary on Ocrober 13 on 15 days and nights with disciplinary fines. Trigubov doesn’t agree with it, considers it to be unlawful and groundless.

Also defenders were supposed to have a meeting with convict N. However administration said that he left for medical treatment to the penal colony № 55. Svetlana Malyugina couldn’t manage to get there due to lack of time.

As soon as she left the colony, she wrote a complaint to Ivdel prosecutor office upon violation of Trigubov’s rights. 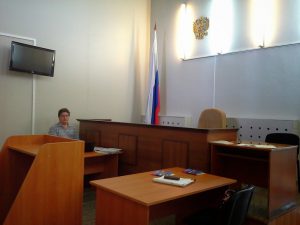 The same day attorney Roman Kachanov took part in a court hearing of Ivdel town court upon a problem of legality of putting convict R. in the preventive list of two types: «prone to prison break» and «prone to extremism».

Convict and his relatives think that this action caused his transfer to Yamal-Nenets district for detainment.

After parties have shared their arguments, judge handed down a court order to pass this civil case to local court due to necessity convict R. to be present there.