On October 22, 2014 a judge of the Sverdlovsk regional court -Olga Sazonova was hearing an appeal towards a member of Public Monitoring Committee — Olga Dianova.

Let’s remind that after a hunger strike of public observers — Larisa Zakharova and Olga Dianova have been prosecuted on administrative article for unsanctioned picket and fined up to 10 000 rubles each. 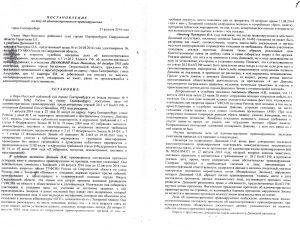 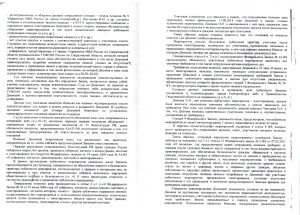 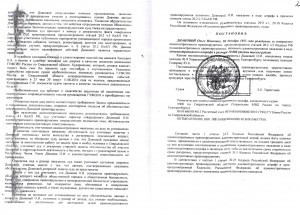 As we all know regular presence of civilian even at night time is not supposed to be reconciled with authorities. And we all remember those women peacefully were sitting and lying outdoors at Central Stadium; they didn’t put forward any demands and claims; next to them there was a poster with neutralized — «Hunger strike of members of Public Monitoring Committee».

Thus we’ve spent 8 days before Head of the Prison Directorate -general Khudorozhkov deceived police officers saying that «form of demands have public nature with application of visual propaganda» and attached to his letter a statement signed by L.Zakharova and O.Dianova with their demands. Fact that this statement wasn’t shown in public but simply registered in the Federal Service for Execution of punishment, wasn’t important to general.

Generally, what does general Khudorozhov have to do with a hunger strike of members which took place at the Central Stadium not at the Federal Service. Apparently, this person feeling soon moment of goodbyes to his uniform, decided to join public activists and as an activist who should comply with law and point out unlawful actions of others, he wants inform police about this «illegal steps». Well.. good for him.. but maybe better off not deceiving authorities..

As a result a judge of the Sverdlovsk regional court — Olga Sazonova «has swallowed» this lie, taken framed-up case and upheld a decision of a judge -Terentyeva.

Sure, Olga Dianova won’t stop there. Supreme Court, European Court of Human Rights will say their words either.