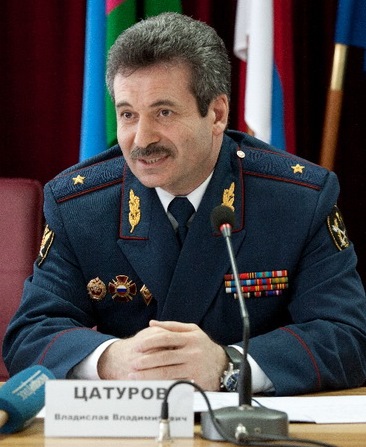 On October 10, 2014 it was a meeting of the representatives of Fund «For convicts’ rights protection» with deputy head of the Federal Service for Execution of punishment — Vladislav Vladimirovich Tsaturov.

There human rights defenders have passed results of independent investigation of beatings of convicts in the colonies of Mordovia in September-October of 2014; materials of questioning and photos of beaten convicts. Defenders have stated that in the course of inspection it’s necessary to question prisoners who were subjects to physical abuse and demand to keep video tapes with what happened in those days.

Vladislav Vladimirovich promised he would send inspection to Mordovia soon  and after he is ready to meet in 2 weeks and show results of inspection.

Well.. after two weeks there was another meeting with V.V. Tsaturov where he informed us that he has nothing to do with the colonies but only supervise the pretrial detention centers and special departments. For what today’s meeting happened ?? You invited us to meet and discuss results of inspection? Who deals with this question now? Answer shocked us — issues of situation in the correctional facility are under Aleksandr Vasiliyevich Gnezdilov… former warden of the Federal Service for Execution of punishment in the Saratov region. On my next  question: How come this person failed to control one region where crimes and anarchy are «in blossom» and now he controls whole country? Vladislav Vladimirovich interrupted me saying that this question is not for him.

So, if Vladislav Vladimirovich doesn’t supervise it, let’s meet with A. V. Gnezdilov. But we were said he has just come back from business trip and now he is at home. What about results of Mordovia? Inspector also has just come from there and report is not finished. Next week materials will be sent to authorities of the Federal Service and only then sent to Fund. If defenders are not satisfied with results, Vladislav Vladimirovich will be ready to see them again.

How come it’s not done if there is an article on the site of the Federal Service about conducted inspection?

It’s not results of inspection, it’s just press-service of the Federal Service in Mordovia has given material for publication.

In general, this meeting has no results. Oh no there is a result. We’ve found out something interesting — — issues of situation in the correctional facility are under Aleksandr Vasiliyevich Gnezdilov.

These are only my thoughts and they are not very optimistic — now situation in the Saratov colonies spread over the country?! I’m afraid  that colonies will become red of blood.. It’s like in Mordovia so far…