On 17-23 November 2014 as a part of the project «Public service for penitentiary control» there was a human rights trip to the Republic of Mordovia in order to help prisoners in the penal colonies as well as to get materials connected with refusals to initiate criminal proceedings upon September’s beatings of convicts.

It’s worth to mention that Ural lawyers and human rights defenders have inspected penitentiary facilities constantly at relatives of convicts’ requests. Thus, during one of the inspections of Mordovia’s camps in the beginning of October it was found and recorded facts of mass beatings of convicts.

All the materials have been given to the Investigative Committee of Russia and the Federal Service for Execution of punishment for conducting inspections.

the Investigative Committee as usual «dropped down» it to Zubovo-Polyansky investigative department and an inspection of the Federal Service didn’t find any violations except only one- beatings hadn’t been recorded by camera. As it said jail officers were subjected to administrative liability… 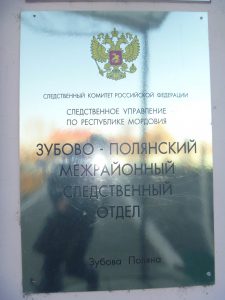 After  receipt of new «portion» of mass beatings and refusals upon ALL the criminal facts towards convicts by Zubovo-Polyansky department, human rights defenders have organized a trip again to the Republic of Mordovia.

On 19 November 2014 at the penal colony № 1 Vladimir Kapustin consulted four convicts — S., P., A., K. Convicts S. and A. have given written explanations.

Convict S. has complained of his beating in solitary by jailers of the facility — Valery Trofimov and S.V.Pimakov together with two officers from the Federal Service (he doesn’t know names); of the fact that doctor hadn’t recorded traces of beatings; of the fact that he hadn’t been told the reasons why had they put him into solitary back. After written explanations convict S. has demanded not to make steps to protect him and just to tell his wife about what had happened and for some reason member of Moscow Public Monitoring Committee — Anna Karetnikova.

Convict A. has informed us that convict Maksim Buzikov before suicide (on 8 November 2014) was forced to commit suicide by a jailer — Valery Tofikov. Now this convict is scared because of his confessions on public; he asks to protect him and transfer maybe to another colony.

Besides, convict A. is mad that his hunger strike since 29 October till 8 November 2014 hadn’t been registered in a log of insidents.

Convicts P. and K. have refused from complaints saying that they were not ready to complain.

On 20 November 2014 Vladimir Kapustin provided on convict with legal help at the penal colony № 10. But it was supposed to be two more. One prisoner T. there was no on the lists of convicts. The second one  — G. a lawyer couldn’t question him because having arrived at 10 am he was admitted only at 5:30 pm and didn’t have time to do it.

Kapustin thinks that «keeping» him near the colony was a wish of warden of the penal colony № 10 to make artificial obstructions for communication of convicts with lawyers or mockery when some woman who showed up after him, were staying there since 11 am till 5 pm.

On 21 November 2014 a lawyer Vladimir Kapustin consulted convicts at the correctional medical facility № 19 who were transferred on 20 November 2014 from the penal colony № 12. They have given written explanations. 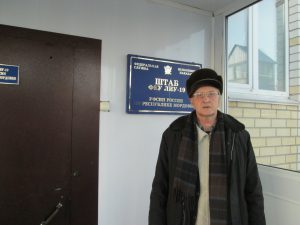 Both said that there were no reasons for their transfers of healthy people to the medical facility for drug addicts. On 20 November they together with five prisoners refused to get into prison truck. According to convicts, by order of warden of the penal colony № 12 -Aleksandr Milakin they were beaten with batons, arms and legs kicks by officers in number of 15 people. Only when Anoshin cut his throat in five spots, they stopped beatings.

After transfer into the correctional medical facility wasn’t conducted medical examination at all. Both have bodily harm in the form of swellings and bruises. However a lawyer couldn’t take photos because his camera had been taken away illegally but he of course had received it back later.

That day Vladimir Kapustin had left a statement in the name of warden upon the facts of denial of access with camera and necessity to provide beaten convicts with urgent medical check-up.

Human rights defender — Larisa Fefilova in the presence of a lawyer has given a complaint to prosecutor of a region upon all the facts including beatings and camera thing.

Vladimir Kapustin mentions that convicts want to solve problems and have fear that they will be tortured there. 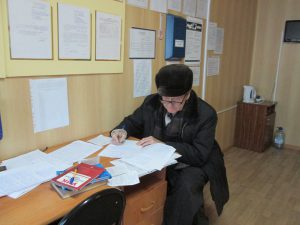 The representatives of penitentiary facilities where Kapustin tried to get in have met with a cold reception. The same was about October visit — meetings with convicts were given only after special calls to alert unit of the Federal Service of the Republic of Mordovia.

Those days a lawyer Roman Kachanov tried to get familiar with materials of pre investigational checks upon statements which had been lodged due to September’s beatings of prisoners in Mordovia’s camps.

During two days (19 and 20 of November) officers of Zubovo-Polyansky investigative department were «marinating» Roman;  apparently they tried to check degree of seriousness of his intentions or strength of his nerves.

Investigator — Andrey Chaldushkin who is studying the materials of pre investigational inspection upon a request of Roman Kachanov and Fund «For convicts’ rights protection» either with some magical means he disappeared or said that he wasn’t allowed to give materials without permission of chiefs.

As for acting head of department — Andrey Turnayev showed up only once at his work place. To request of Roman Kachanov to refer to law or something really legal Andrey didn’t react; it’s clear that this law is missing. 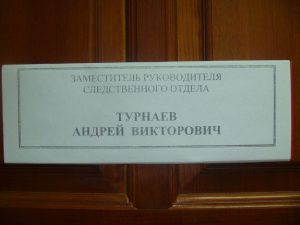 At the end of the second day of expectations, Roman Kachanov couldn’t take it any longer and he called to the Investigative Directorate in Mordovia — 89053891000. There they promised to fix it.

As a result they did, but Turnayev wasn’t satisfied. We hope that it only seems to us…

On the third day Roman has got a material of checks which is for unknown reasons called «upon requests of experts of Fund «For convicts’ rights protections» about the use of violence towards a convict O.I.Babikov.» The most part of that folder is for documents and materials which were given by defenders — acts of advocacy interviews of seven convicts and photos of bodily harm. Then it was some documents devoted to Babikov and — refusal to initiate criminal proceedings over the fact of the use of force towards exactly Babikov.. 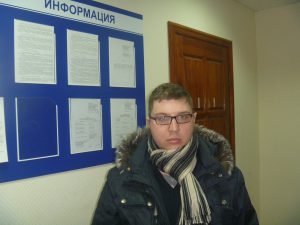 «And where are documents about other prisoners, for example 7 more who had been pictures and questioned?» -asked Kachanov. Turnayev answered that all the rest are in the other materials and there are also refusals what means before explanations and photos(!?). In other words, all testimony of crimes which had been found by lawyers and defenders happened to be sticked to another case towards Babikov; they were not checked; examined or analyzed..

Protection of criminals and crimes towards convicts is obvious! 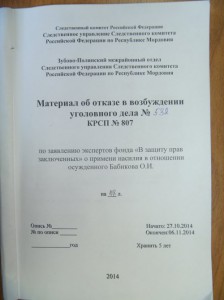 Defenders will keep striving for stoppage of tortures towards convicts of Mordovia’s camps as well as bringing to responsibility.