As a part of the project «Public service for penitentiary control» on 26-28 November 2014 there was another human rights trip of a lawyer Roman Kachanov and an expert of Transregional public organization «Transregional center of human rights» and coordinator of «Yekaterinburg Movement against violence» — Gleb Edelev to the penal colony № 10 in order to provide a convicts -Boris Stomakhin with legal help.

Before this trip Roman Kachanov had addressed to the chairman of Perm Public Monitoring Committee — Sergey Isayev with request to give information if there are any prisoners who need legal help or not. However response of Isayev hasn’t been received.

At the penal colony № 10 a meeting took place without impediment with Boris Stomakhin.

Before us this convict had been visited by members of Perm Public Committee and the representative of Ombudsman of the Perm region. No violation of his rights found.

Again we have to mention that according to the decision of the Supreme Court of Russia an administration of the facility has permitted a lawyer Roman Kachanov to bring dictaphone on the meeting and camera with Boris.

During the meeting with Stomakhin his defenders told him that they had challenged a decision to put him on a preventive list as «inclined to extremism» and «inclined to prison break», as well as disciplinary punishments.

As we found out in the beginning of November Boris Stomakhin was again brought to disciplinary punishment in the form of detainment of ward-type room for 4 months. So we promised to challenge it in a court. Stomakhin wrote an explanation why he got this type of punishment. 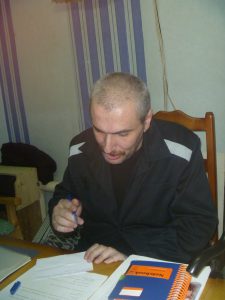 Meanwhile, members of Perm Public Monitoring Committee have prepared their report on results of inspection of Boris Stomakhin; full text is down here:

«Visit to the penal colony № 10 (Vsesvyatsky of the Perm region) on 12 November 2014 due to the complaints of his lawyer, request  of member of Public Monitoring Committee of the Sverdlovsk region -V.Bashkov about providing Boris Stomakhin with help (serving his sentence at the penal colony).

Head of sanitary department: B.V.Stomakhin asked to release him from works under art.106 of the Penal Code because of health condition; we conducted all necessary examinations; surgein stated restrictions of hard labor connected with carrying of heaviness and long walk, but permitted walks with stick, wearing of special shoes; we might ask for medical help at any time, around-the-clock a medical officer is on duty; the penal colony has a contract with a hospital for civilians on 100 000 rubles about special medical help and service; as for Stomakhin there is no such necessity; there are plenty of medications; also mother of Stomakhin brought remedies to him which we can use if he asked at the medical department.

The meeting with Stomakhin was at the office of operative office confidentially.

B.Stomakhin: has been serving his sentence since 22 August 2014, he is being at the squad under strict conditions of detainment; he was put on a preventive list: «inclined to extremism» and «inclined to prison break», he has three disciplinary fines in the form of solitary detainment ( the reason: impolite talks with an officer, refusal from works under art.106, refusal to register at the alert unit; 7.11.2014 he was detained in the ward-type room for 4 months for violations of clothing rule (he was in civilian clothing).

He moves with help of stick. Complains of pain in body side, he receives pills, gets better.

He got a long-time meeting with mother — R.L. Stomakhin; with workers of organization «For human rights» … Edelev and Roman Kachanov (the last is his lawyer), they recorded his interview and made copies of disciplinary papers.

With members of Perm Public Committer on 28.08.2014 Stomakhin couldn’t meet as in the first place he didn’t sign for it. Stomakhin considers himself as political prisoner who serves his sentence for the second time, illegally.

Having refused to obey an internal regulation, B. Stomakhin should understand possible consequences. Moreover, he believes that he will be transferred to «regime prison». This critical evaluation of current situation apparently comes from his statement about prosecution by administration.

Maybe it’s connected with his experience of detainment into a colony of the Nizhegorodskaya region where he was released from any works. His statements about fake disciplinary punishments in our opinion look groundless (we should admit that conclusions of members of Perm Public Monitoring Committee are preliminary, because we didn’t have opportunity to analyze disciplinary materials.)

Besides, premises for disciplinary fines were occupied almost, major part of convicts is in the squads of special detainment. In other words, B.Stomakhin is not the only one who is subject to «segregation».

Our preliminary evaluation is the second and the fourth disciplinary punishments are lawful and reasonable (refusal from works — Stomakhin explained that he wouldn’t do it at all; as for ward-type room — Stomakhin said that administration offered him to change clothe but he replied that his robe was in a bag and he wouldn’t do it.); the first and the third fines (when he was supposed to do fatigue works and he was called up to warden) raised doubts.

Also he pointed out some violations of rules in particular connected with decision making about bringing him to administrative responsibility. Thus, the first decision about punishment in the form of solitary was made without commission and he didn’t have chance to explain.

Stomakhin himself thinks that attempt to challenge those decisions won’t have results. In his opinion the easiest way to improve relations if administration leaves him alone.

Mentioned above have no formal character, don’t go with requirements of law and obviously don’t have chances to be satisfied. Thus, the representative of administrative says that Stomakhin was offered to do simple job: to water flowers; clean up windows etc.  All the above considered, and after full examinations, administration complies with law and order. The exception is departure from official procedures of bringing to disciplinary responsibility which needs to have additional documental proofs what Perm Public Monitoring Committee is dealing with at the moment.

Apparently, Perm Public Monitoring Committee may assist B.Stomakhin only that officers of the facility will apply only demands and procedures mentioned in law.