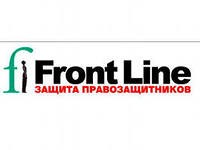 Front Line Defenders — The International Foundation for the Protection of Human Rights Defenders has decided to allocate money in order to pay for fine of members of Public Monitoring Committee — Larisa Zakharova and Olga Dianova for a hunger strike near the Federal Service for Execution of punishment.

Let us remind that a judge of Verkh-Isetsky regional court -Ekaterina Terentyeva by her decision on 27-28 December 2014 condemned members of Public Monitoring Committee — Olga Dianova and Larisa Zakharova in administrative case and inflicted a penalty in the amount of 10 000 rubles — minimal according to art.5 of Code of administrative violations.

As it follows from decision, a judge stated that Olga Dianova and Larisa Zakharova had participated in public picketing but it doesn’t go with law.

Thus, upon Law «On meetings….» the mandatory characteristic of picketing was visual propaganda. However, during a hunger strike no visual propaganda was used by Olga Dianova or Larisa Zakharova. There was only a poster «Hunger strike of members of Sverdlovsk Public Monitoring Committee». I’m wondering what agitated this poster for? It only acknowledge the fact of hunger strike. Anyway, a judge didn’t explain it. 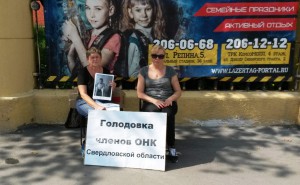 Larisa Zakharova and Olga Dianova and their protection don’t agree with such decisions and they will challenge them in the Supreme Court and European Court of Human Rights with complaint of violation of articles 10 and 11 of European Convention.

We are grateful to Front Line Defenders who agreed to help members of Public Monitoring Committee — Larisa Zakharova and Olga Dianova. Human rights defenders of the Urals.