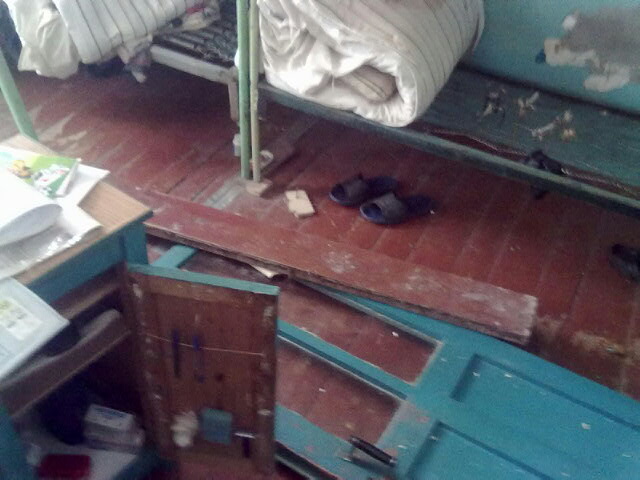 Having analyzed information which we’ve got about incidents in the pretrial detention -1 of Chelyabinsk, been to in the isolator and examined actions of officers of the Federal Service for Execution of punishment on 25 November 2014 in the penal colony № 6 where it was an attempt of riots, we put forward  our version of what’d happened.

This conclusion is based on the fact that since 7th December members of Public Monitoring Committee began receiving calls and messages with complaints of bad nutrition and medical delivery. There were no special or new complaints: both nutrition and medication are in bad condition: we notice it constantly during inspections. But we’ve never received simultaneously so many complaints.

So we understood that something was happening.

The fact, that the first who had called, they offered to come over to the pretrial detention-1 and join act for protection of convicts; this fact has suggested this thought of us.

At first we’ve thought that someone wanted to set us up. And we easily realized who did: the Federal Service for Execution of punishment because we’ve heard so many times from convicts that they were offered to write an accusation on us. (according to a relative of a convict those offers went from officers of Ministry of Internal Affairs of the Chelyabinsk region). Also there were cases when our cells have been opened when we left them on a check-point of the colonies; we don’t mention wiretaps for members of Committee.

In the pretrial detention center-1 there is a quite situation despite of bad nutrition, bad medication, extortion of cell phones from convicts (which only jailers could pass them); inmates don’t make riots because of that.

We base our supposition on the following facts:

a) in the pretrial detention center-1 there is hierarchy among convicts and they are ok with it.

b) in the pretrial detention center-1 some » shot caller» Yakub was transferred there who was conflicting with current «underboss» of the facility. The operative service of the Federal Service not only knows about it but controls. They for sure are aware of that presence of Yakub will cause tension there. It means they have transferred him intentionally. What for?

c) Answer on this question is in testimony of Ovlyakulyaeva: «I came up to the isolator around 9 pm on 8 December. At the entrance there was a black Lada Priora, from which a young unpleasant woman got out of the car and ordered me not to tell about what’s happening to journalists and Public Monitoring Committee. She said that in five minutes riots would begin, cell of «underboss» would be broken. In the morning this position would get her husband -Yakub «. (quote from ZNAK.com).

It’s proved by the run of events: They broke only the cell of «underboss» but also equipped a group of Yakub, what means set inmates against all the rest.

ONLY personnel of the facility could unlock cells and let inmates move around freely. Why did they do it? IN order to throw a «true» reason of riots into society — fights among criminals? The most important moment — no fights among convicts in the facility cannot happen in locked cells. One exception: if only officers don’t let out from cells. But it’s not enough in order to make «showdown» among them; cells of all convicts must be unlocked.

That’s why we suppose that a riot was initiated by jailers.

It also leads to a thought that «shaking up» a situation in the facilities is in the nature of planned thing by jailers.

At first there was an information that Kargiyev had organized a riot in the facility in order to get rid of local «underboss» — !

Why the Federal Service spreads information which is far away from reality it’s quite clear.

But when such information is supported by prosecutor office it causes suspicions. Suspicions about who had organized riots.

Suspicions are getting stronger that members of Committee were not admitted to the scene of action on 9 December, were not allowed to meet with participants what is rude violation of law on public control. It was happening in front of prosecutor of the region — Voytovich. Aleksandr Petrovich didn’t react like in 2012 in Kopeysk.

What did they hide from Public Monitoring Committee?

Maybe they were afraid that members would bust absurd version about «initiator of riots — Kargiyev» and tell that in the facility someone had unlocked cells, let out and set against inmates? Is that what scares the Federal Service, investigation and prosecutor office?

This issue is essential for the Chelyabinsk Federal Service for Execution of punishment today: on 22 December it’s expected that sentence for former warden of the penal colony № 6 — Mekhanov will be declared soon. It follows thence destiny of most of former heads of our  Federal Service for Execution of punishment including retired General depend on this sentence.

Riots in the colonies currently are playing into hands of jailers.

We are extremely worried about informational and procedural situation around the facility -1.

We are not sure that those incidents would be investigated honestly and fairly.

That’s why we put a question for the representatives of all state bodies who are investigating this case: are there at least one honest person who will open up a real picture of incidents; real initiators and executors either?