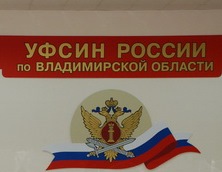 «Interesting thing though. There is something new in the works of jailers», – says director of noncommercial partnership «LEGAL BASIS» Aleksey Sokolov after receiving the response on his complain about a meeting ban with a convict according to p. 4, art. 89 of the Penal Code at the prison № 2 from the Federal Service for Execution of punishment of the Vladimir region.

Let us remind that a convict P. has addressed to human rights defenders with complaint of bodily harm by the officers of the prison № 2 of the Vladimir region at the time he was being there.

Due to this incident in October and November 2014 Aleksey Sokolov and Moscow lawyer Irina Biryukova went to the correctional facility in order to protect the convict.

Aleksey Sokolov who is having power of attorney, administration didn’t give a chance to see the convict. Because of that human rights defenders have filed claims to the Prosecutor office and to the Federal Service for Execution of punishment in the Vladimir region.

What was their surprise when both Aleksey and Irina had received almost similar runarounds from to the Federal Service for Execution of punishment. Besides that the representative of the Service with last name Kulagin didn’t state any reasonable grounds why Aleksey Sokolov had been rejected (when law says he can have a meeting with a convict according to p. 4, art. 89 of the Penal Code of the Russian Federation, Kulagin also offered Aleksey to challenge illegal actions at the Public Monitoring Committee of the Vladimir region. 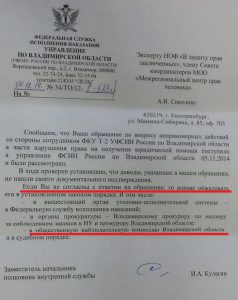 What does the Public Monitoring Committee of the Vladimir region have to do with the Federal Service, it’s still unclear.