On 18 December 2014 as a part of the project «Public service for penitentiary control» members of the Sverdlovsk Public Monitoring Committee — Larisa Zakharova and Svetlana Malyugina visited the penal colony № 2 of Yekaterinburg in order to inspect the convict Ruslan Tedeyev who had earlier given a video interview and been put into secure place in the premises operating as a pretrial detention center.

This time the convict wanted to speak to defenders confidentially, without the representatives of administration. He said that he had been visited by officer from the Federal Service for Execution of punishment who asked him to write an explanation upon given earlier statements to members  to transfer him to any other colony from there. This place is considered to be «torture chamber» among inmates.

Also officer’s «request» was with psychological pressure, after what Tedeyev wrote this explanation to chief of the Federal Service which they demanded to do. The convict didn’t deny that he didn’t want to be into the facility where law is being violated constantly by authorities.

Members of the Public Monitoring Committee were not surprised: everything was according to «system plan»; everything is the same like in the penal colony № 63 when several convicts stated about tortures in the facility later wrote refusals after visits of officers of the Federal Service. The convicts of the penal colony № 63 told us about it this in particular «convict-activist»- Leonov.

In the penal colony № 2 members faced the same thing. Only one convict didn’t turn down his statements and told us everything and gave also this written statements on 10 pages in envelope. Officers wanted to get this envelope saying about rules of the penitentiary code on correspondence of the convicts. 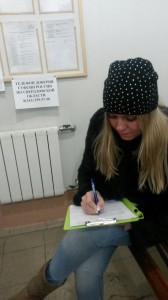 Ruslan Tedeyev also is afraid for his life and security; he asked members and defenders keep an eye on him because while being in the correctional facilities he stopped trusting law and justice.