In the Sverdlovsk region legal proceedings have began against the Federal Service for Execution of punishment run by general Sergey Khudorozhkov.

The case is about a fact that in summer of 2014 Larisa Zakharova couldn’t use her phone number for undefined reasons and people willing to get help from lawyer couldn’t reach her and get legal help.

In August 2014 upon this fact Larisa Zakharova addressed with written application to cellular service provider MTC at the end of August and received a response where she was informed that this number was blocked by the decision of the Federal Service for Execution of punishment on 23 July 2014. There also had been said that at the of application her number had been unblocked. 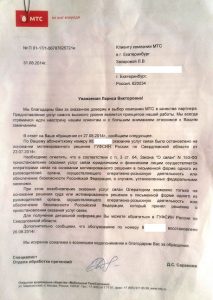 At the first preliminary court hearing which was held last week, the representative of the Federal Service said she found out about court proceedings yesterday and as for blocking cell phone she made a request and didn’t get a response.

The next court hearing is appointed on 29 December 2014 at the Verkh-Iseyskt regional court of Yekaterinburg.

There we will find out how and why the Federal Service run by general Khudorozhkov is blocking phone number of member of Public Monitoring Committee who fights against tortures and law violation in the penitentiary system of the Sverdlovsk region.

We would like to point out that blockage of phone number of Larisa Zakharova occurred when public activists were investigating case about tortures in the penal colony № 63 and after hunger strike at the Federal Service for Execution of punishment.